We never would’ve guessed that Black Monday‘s third season would morph into a quasi-slasher film, but here we are!

In Sunday’s finale, the identity of the killer was finally revealed (more on that below), as Mo and Dawn headed to the altar to exchange fake vows, unaware of how many real feelings the faux-wedding would trigger. But the group had to maintain its focus (well, whatever focus was possible amid the mountains of cocaine they snorted) in order to lure the killer out with the Plan Boys’ ridiculous schemes. Did everyone survive the chaos? Let’s recap!

MARRIAGE OR MASSACRE? | On the day of the wedding, the bride (Dawn) is ready to catch whoever’s trying to off them. However, since it’s a day that ends in “Y,” Mo and Blair are already hopped up on heaps of nose candy. Now knowing that Lenny Leighman is still alive, he’s their number one suspect, and they plan on using sodium pentothal — aka, truth serum — to get him to confess. The fact that Lenny doesn’t drink alcohol puts a wrench in the plan, so the “Plan Boys” (as the coked up Mo and Blair are now calling themselves) are gonna have to get creative if they want to get Lenny talking.

The fake wedding, however, ultimately wears on Dawn. “When am I gonna have a normal life where I’m not lying to everyone all the time?” she asks Mo. “When am I going to have the life that I want to live?” Blair interrupts what could’ve been a Hallmark moment for help in dreaming up a Plan B, which turns out to be… warm, fresh milk? “I dabble in dairy, for sure,” confirms Lenny, who then splits the drugged milk concoction, and hands the other half to Mo. It’s down the hatch for both men, and if we know anything about Black Monday, things are about to get weird.

During the “vows,” Mo, hopped up on multiple drugs at this point, spills the truth. “I love you, Dawn. It’s like somebody walks into your life and you just can’t imagine what life was like before then,” he says with dreamy eyes and a genuine smile. “I don’t know what souls are made out of, Dawn, but you and I have the same one.” He tells her she’ll never have to face her problems alone, and promises she can do whatever she wants with his butt, despite his former insecurities. And again, since this is Black Monday, that’s exactly what Dawn needs to hear to be completely won over. Yassir pronounces them husband and wife and… wait, is this still a sham wedding or a real one?

Later, Yassir tells Mo and Dawn that his drug dealer made a mistake. The drug he bought wasn’t a truth serum. Instead, it was a drug that prevents erectile function. And on Mo’s maybe-wedding night? (We’re trying to ‘ship here, man!)

SO WHODUNNIT? | Keith takes a videographer with him in hope of nailing Lenny. (Dawn declares “poon–i” to be the safe word, in case he needs help.) Lenny’s up front about wanting revenge, but he didn’t kill Tiff and the rest. Bullets then fly through the window, striking him dead and causing Keith to scream the safe word. Shortly, everyone is comically screaming the slur as loudly as they possibly can because this show is very special.

Mo, Dawn and Blair rush in to find their distressed friend and Lenny’s dead body, just as Corky, posing as the videographer, reveals herself to be the killer! She explains that after Blair destroyed her life, she wanted to ruin his. She admits to trying to kill Blair, and to the murders of Dr. Egon, her father, Wayne, Larry and, of course, our dear, sweet Tiff. 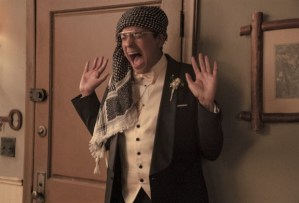 Yassir interrupts the reveal, which distracts Corky long enough for Dawn to throw her against the wall. The gang runs out the door, but Corky’s fast to follow, once again holding them at gunpoint. Blair stupidly brags about recording everything, so Corky shoots the tape out of his hand. Then, she fires at Dawn, but Mo jumps in front of her and takes the bullet. “I told you I didn’t need you to save me!,” she cries.

As Corky is about to get even more gun-happy, a sword pierces her chest and she falls to the ground dead. It’s Tiff, and she’s alive! Corky shot the wrong Tiff that night at the club, confusing Boy Georgina for the real thing. Since then, Tiff was in police custody because the cops feared for her life.

The next morning, Dawn and Mo exchange “I love yous” in the back of an ambulance. They ask their friends to shut the door, but the dopes take that as a sign to climb into the vehicle as it pulls away to bring Mo to the hospital.

Happy Tiff’s alive? Did you finger Corky as the culprit? Grade the episode and season below, then light up the Comments with your thoughts!