For just as I struggled that first time during quarantine to tuck a shirt that had buttons into a pair of pants that didn’t close with a drawstring, the heroes of The CW’s DC’s Stargirl came to realize, upon returning for Season 2, that their superhero suits were… a bit less super.

“When I came back for the second season, I’m going to be straight honest — it didn’t fit. It wasn’t zipping up!,” series lead Brec Bassinger shared during a recent press event. “I had that ‘quarantine 15’ and was like, ‘We’re going to have to work something out.’ So L.J. [Shannon], the costume designer, and our amazing wardrobe team did some lovely fixes…. They were able to let some fabric out here and there.”

Stargirl’s star-spangled get-up presents problems “specifically around the neck,” Bassinger detailed. “It’s a turtleneck and while it creates great lines, it’s extremely tight — so much so, it left like a bruise on my neck. But I feel cool, because superheroes should have battle scars, and my suit was the cause of a ‘battle scar.'”

“I’m on the same page as Brec — they let out a few inches for me. Holla, quarantine snacks came through!,” she said with a laugh. “But it is what it is, and what was such a blessing is no one pressured us into anything, no one cared. They were so supportive, like, ‘You look great!'” (Washington also appreciated a loosening of Doctor Mid-Nite’s headpiece, since “I was getting the moon emblem from my cowl embedded into my head, like a sticker.”) 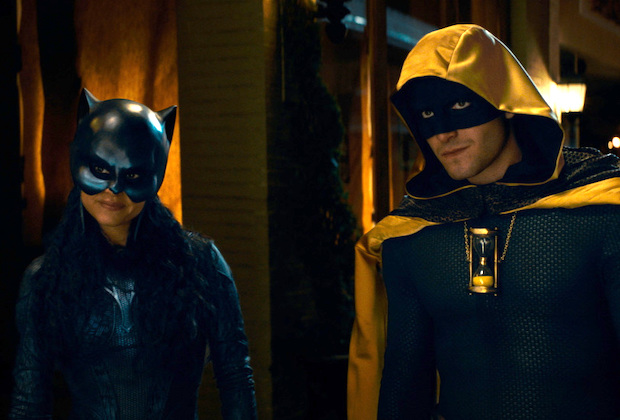 Cameron Gellman, who plays Rick aka Hourman, observed that a costume’s belt was the “real test” of how much quarantine-induced latency had affected an actor’s physique. “When I came back, it was the same situation, and that [belt] will pop off,” he said. “You’ve got to earn that staying on your body, so that was my gauge for how I was doing, fitness-wise, in the second season.”

(Gellman also related  how ahead of Stargirl‘s first season, they trimmed the length of his character’s cape, because “when we were doing running tests, I was regularly wiping out — and that’s a bad thing and not an Hourman thing!”)

Yvette Monreal reported no issues, past or present, with Yolanda’s sleek Wildcat suit, other than the fact that it can take 20 minutes to get into (and that an alteration had to made to accomodate, um, bathroom breaks). “Mine was quite easy, actually,” she said. “It’s one piece, unlike Brec’s, who has her top, her shorts, her socks, her boots….” And just as Hourman’s suit apparently has itty bitty hourglasses etched into it, Wildcat’s boots “have little paws on them,” Monreal noted with a smile. “I love them!”

Want scoop on Stargirl Season 2, or for any other show? Email InsideLine@tvline.com and your question may be answered via Matt’s Inside Line.