THE PERFORMANCE | The ship really hit the fan in the third episode of Mike White’s dark social satire, which featured one of the most memorable maritime disasters in TV history. And Coolidge was the captain at the center of the iconic catastrophe.

As boozy socialite Tanya McQuoid, Coolidge has spent much of The White Lotus‘ first three hours walking a fine line between comedy and drama, leaving viewers guessing as to whether they should be laughing or crying at the grieving billionaire. That tension reached a crescendo on Sunday when Tanya boarded a yacht to scatter her late mother’s ashes, as a captive and soon-to-be traumatized audience of four looked on.

Coolidge deftly planted the seeds for the seafaring calamity to come during the event’s quasi-cocktail reception, as Tanya’s efforts to keep it together emotionally and mentally started springing leaks left and right. “Heyyyy,” she randomly, groggily called out to Jake Lacy and Alexandra Daddario’s confused newlyweds, Coolidge imbuing her character’s inflection with a mix of geniality and lunacy. When, moments later, Tanya verbally assaulted them with an uproariously arbitrary “Wee-hee!,” Coolidge deftly foreshadowed the iceberg, dead ahead.

As she clumsily took her place at the rear of the boat for the main event, Tanya furiously downed what was left in her champagne flute before commencing with her stream-of-conscience eulogy, which went from somewhat coherent to off the rails in record time. And in Coolidge’s capable hands, it was a mental spiral at its most artful.

“She was a nymphomaniac,” Tanya announced, Coolidge steering the tribute’s first sharp detour with hilariously haphazard precision. But as the tangent devolved into darkness, opening old mother-daughter wounds in the process, the actress allowed us to see the real pain beneath her character’s unhinged energy.

When Tanya declared that “I miss my mother even though she was a big jerk!” we felt the pain behind those words (even as we were guffawing at the sheer inelegance of it all). And when she ultimately broke down in a chaotic fireball of tears and “mother-mother-mother”-narrated convulsions while scattering the ashes, Coolidge officially turned The White Lotus‘ most impenetrable character into its most relatable. 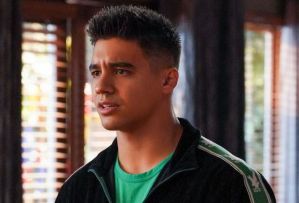 HONORABLE MENTION | For most of grown-ish‘s four-season existence, Jordan Buhat has played the mirthful foil as Vivek. Sure, there were glimpses of something deeper when Vivek questioned his sexuality for instance, but those moments felt fleeting. Sobriety replaced goofiness on the Freeform coming-of-age comedy this week when the university permanently expelled Vivek and revoked his scholarship for selling drugs. Suddenly, a crestfallen Vivek had to confront the issue like an adult and talk to his parents about his embarrassing predicament. Slumped shoulders and the way his malleable face morphed into shame spotlighted Buhat’s thoughtful performance and made it clear the stakes were much higher for Vivek than the showy row Zoey and Dre had earlier in the episode. Vivek’s father disowned him and was more unforgiving than his mother – just as he feared. Although Vivek braced himself for emotional impact, Buhat’s misty eyes and shaky hands affirmed that parental abandonment hurts no matter the age. 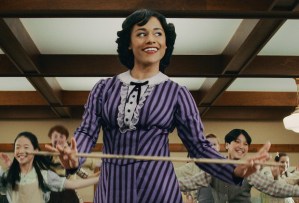 HONORABLE MENTION | We could have honored Schmigadoon!‘s Ariana DeBose for her vocal prowess alone. Or for her fancy footwork during schoolhouse showstopper “With All of Your Heart.” But what truly set her apart is how she managed to take a character we’ve all seen before — schoolmarm Emma Tate is clearly inspired by The Music Man‘s Marian Paroo — and make her feel entirely new. She imbued Emma with a genuine warmth and sense of self. Even when she went along with the world order and burst into song, it was obvious that there was a fully functioning brain in her head. What particularly impressed us this week was how DeBose relayed Emma’s sudden feelings for Josh. She allowed Emma’s implausible affection to permeate each and every elongated note until we believed those feelings to be true. You could feel Josh falling for her in the moment, as we did ourselves. 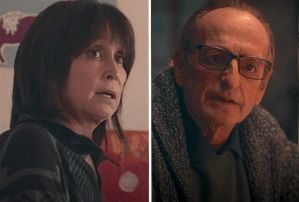 HONORABLE MENTION | We always enjoy a pop-in cameo from Dave‘s hilariously unhip parents Carol and Don on FXX’s raunchy rap comedy, and when Dave was forced to move back home this week, Gina Hecht and David Paymer took full advantage of the extra screen time. Yes, they were as clueless as ever — “Is this a punk? Am I a punk?” Carol fretted at one point — but Hecht and Paymer also got to reveal new depths to Carol and Don and take them beyond mere caricature as Dave struggled to readjust to living under his parents’ roof. Hecht and Paymer were already some of the most adorable scene-stealers on TV, and thanks to their deft work this week, now we know Carol and Don (and the source of Dave’s ongoing angst) even better.