Sylvie’s Love, which is currently streaming on Amazon, is a visually stunning love story centered around an ambitious woman (Tessa Thompson) and an up-and-coming saxophonist (Nnamdi Asomugha) who reconnect years after a sweet summer romance.

Amidst debates about whether projects steeped in Black trauma are necessary or exploitive, the Emmy-nominated film from Eugene Ashe offers something different: a beautiful celebration of Black love with a hopeful ending in which its young couple finds their way back to each other.

Ryan Michelle Bathé, who plays the TV producer Kate in the film, has thought extensively about the “no more trauma” debate and is encouraged by the diverse stories that are available now.

“To see the full breadth of our experience is what’s so important to me,” Bathé tells TVLine. “To know that I’m living in a time when there is Watchmen, and there is The Underground Railroad and Sylvie’s Love and First Wives Club and All Rise… That is, on the macro level, what we need to step back and [say], ‘This is incredible.'”

“It’s no longer that Love Jones comes out and we watch it every month because nothing else [is available], and if you wanted to watch a movie with some Black people falling in love, that was the only one you got,” she continues. “That’s why Black people can recite every line of so many movies [like] The Color Purple, I’m Gonna Git You Sucka, Love Jones… We can recite them because there’s such a lack that that’s what we do. We go back and rewatch that movie over and over. I can remember going to grandmothers’ houses, and they would literally just have some of these movies on loop.” 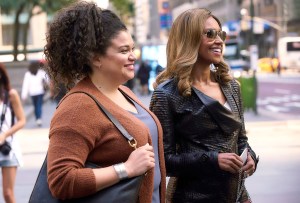 Shows like Bigger and Run the World, which explore love and friendship in a modern setting, and films like Netflix’s Western Concrete Cowboy, which disrupt whitewashed spaces (Black men were among the first U.S. cowboys), show that while there is a shared history of slavery, Black Americans are also individuals with different hopes and aspirations and specific experiences. As more projects embrace unique, more fully realized stories, Bathé is just trying to let these new wave of opportunities sink in.

“It’s weird because for so long, there could be only one [Black person], and it would be the smallest part in a movie. Now there are more specific roles, and there’s so much more,” she shares. “It feels like you’ve been in a dark room for so long, and you come out into this bright, beautiful sunshine, and it’s taking me a minute to adjust my sight… What I repeat to myself has been, ‘This is not a trend… We are here to stay.'”

Bathé, who currently stars in the romantic dramedy First Wives Club (Seasons 1 and 2 are now streaming on BET+), is ready to explore the next frontier in Black storytelling: space. A self-admitted Trekkie and Octavia Butler fan, the actress hopes to take on a sci-fi project in the future.

“I love sci-fi films, [and] I would love to see us occupy that space in a real way,” Bathé says. She points to the 1995 film Strange Days (starring Angela Bassett and Ralph Fiennes) as a good starting point for what she’d like to see in the sci-fi realm.

“It was so good, and they stopped just short of what it would have been, had Angela Bassett not been played by a Black woman, because they don’t get together,” she explains, noting that the chemistry between Fiennes and Bassett in the film was undeniable. “Everything about who she was as a Black woman was layered in so beautifully… I would love to see what we’d be in spaces where there’s nothing but fantasy.”

“There are so many of us who are really into Star Trek and Star Wars and all of these things,” Bathé concludes, “and I would just love to see all of us occupy those spaces.”