As a child actor, he played an affable sidekick named Fish Fisher on Disney XD’s Kirby Buckets and multiple warm and fuzzy voice and live-action roles that the whole family could enjoy. But his starring turn as the titular character on Starz’s new prequel Power Book III: Raising Kanan is anything but cuddly.

Two episodes in, and Kanan has already killed a corner-boy competitor who not-so-coincidentally happened to be a romantic rival. And his mother Raq (Madam Secretary‘s Patina Miller) had to cover his murderous tracks by having one of her son’s best friends become the dead body “the streets needed.”

When Episode 3 airs this Sunday (8/7c), fans can expect even more treachery from Kanan and Raq as they burrow deeper into Jamaica Queens’ duplicitous dope game in the early 1990s. Curtis, in turn, says he can’t wait for everyone to see just how dark and twisted things get.

“It’s the journey and the next step,” Curtis enthusiastically tells TVLine. “I’m excited for people who have seen me in Kirby Buckets and all of the Disney shows I’ve done to watch this next step so they can see my full range and the depth that I have. I finally get to showcase that to the world.” 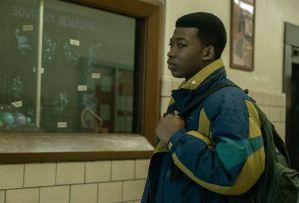 Curtis, who fell in love with the Power universe even before landing the part, says in many ways he spoke the job into existence.

“My team hit me up about the audition, and I was excited because I was a fan of Power and literally had been watching and thinking subconsciously that I wanted to be a part of this world,” says the New Jersey native, who works with a dialect coach to capture his Queens accent as Kanan. “So it was strange that a week later, my team told me about the audition. It was wild. I didn’t know that I was auditioning for Raising Kanan at that point. Just that it was Power, and I was excited to get to do that. I didn’t find out it was actually for this until my last audition.”

It was during that audition, which also happened to be his chemistry read with Miller, that Curtis says everything fell into place.

“When I met [executive producer] Courtney Kemp and a lot of our executive producers, she really gave me insight into what they were looking for with this character,” he expounds. “I already had an idea because we all know what this character grows up to be. But I’m also starting from scratch, in a way, because I’m playing a younger version. That really was an opportunity for me to nail it.” 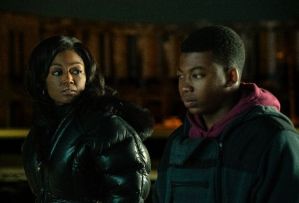 Kemp broke down the scene for the actor, and Miller helped him tap into his emotions.

He remembers that “from the moment I met Patina, I felt that chemistry. She walked into the room with such grace and elegance and power. And when we got into the scenes, she literally punched me in my chest, and it excited me as an artist to work with someone who was pushing me and upping my intensity.”

“The pressure and force she came at me with would’ve intimidated a lot of people, but it excited me and made me want to push back,” he says. “Patina is such an incredible person to be around, and her work ethic is amazing. Getting to explore these characters with her and the rest of the cast makes you want to be that much better on and off-camera, and that’s what you see coming through.”