grown-ish‘s Dre seems like the sort of dad who looks forward to walking his daughters down the aisle. But Zoey kind of took the air out of that dream when she drunkenly eloped with Aaron.

The outspoken father of five made his feelings abundantly clear on Thursday night’s episode, when he barged into his eldest child’s college abode and declared, “You got married in Mexico. I don’t love you anymore.” Turns out Dre got tipped off by a credit card charge that listed the over-the-border chapel where Zoey and Aaron jumped the broom.

There was just one catch — the marriage wasn’t legal because neither of them took a blood test nor paid for a wedding license. But Dre didn’t care about any of this Mexican marital minutiae, especially, as he pointed out, because Zoey and Aaron thought they were legally wed. And that suggests they were capricious at best (and reckless at worst).

Zoey attempted to defend herself against Dre’s verbal attack but it was useless once her dad threw in her past mistakes, such as cheating on a midterm and getting suspended, and, of course, dropping out. “You’re not just a disappointment anymore. You’re an embarrassment,” he barked. 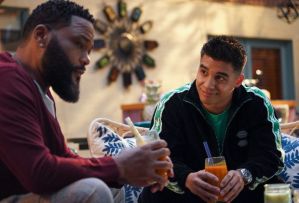 Dre’s harsh reaction brought Zoey to tears, and before running upstairs, the college senior sarcastically thanked her father for stopping by and humiliating her. Aaron chased after her while Jazz and Vivek stared in shock.

Dre, though, calmed down after Vivek made him a smoothie. He even managed to share words of wisdom with Vivek, who was worried about his own parents disowning him for getting kicked out of school. Vivek, who got busted selling drugs, also lost his scholarship. Sigh. So much for that perfect GPA.

Despite being honest and open with his parents about his legal wrongdoings when they arrived, Vivek’s mother forgave him — but his father did indeed disown him. Maybe this is one of the reasons Dre, who overheard everything, later forgave Zoey. He even apologized for his stern and hurtful words and they hugged. Plus, as she reminded her dad, Zoey is 21 and she’s never asked him to bail her out. (Although, keeping and using Dre’s credit card negates that argument a bit!)

By episode’s end, it was Vivek who was crying at the thought of never seeing his father again. Zoey consoled him and said his dad would come around. Here’s hoping for Vivek’s sake Zoey is right.

What did you think of Zoey and Dre’s row on this week’s grown-ish and do you think Vivek and his father will ever be close again? Drop your thoughts in a comment below.