Spotted: The first appearance of a character from the original Gossip Girl on HBO Max’s reboot — and we can confidently say that it’s not who you expected.

Thursday’s fourth episode, now available to stream, puts Zoya face to face with none other than Georgina Sparks’ son Milo (played by The Plot Against America‘s Azhy Robertson), who offers to lend a hand after Julien wages a not-so-civil war on her sister’s birthday.

“Clearly, you don’t know who I am,” the 10-year-old replies when Zoya turns him down. “My last name is Sparks. Really Ivanov, but in this day and age, it’s best to leave that out. Google is your friend. Once you use it, I will be, too.”

As you may recall, Milo — the child of Michelle Trachtenberg’s character and a married man named Serge with whom she had an affair — was born between the third and fourth seasons of the original CW series. Though Georgina initially claimed that Milo belonged to Dan Humphrey, her web of lies was eventually untangled. So, how did this unexpectedly brilliant appearance come to be? 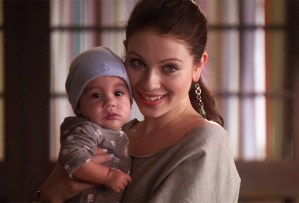 “At first, we were like, ‘Do we bring people back from the original?’ I would die to have Michelle on the show, but we made the decision — and I fully support the decision — to let the audience get to know the new characters before hopefully bringing some people back,” showrunner Joshua Safran tells TVLine. “So we thought of who we could bring back without making the audience feel like they were missing out if they didn’t get a whole episode about them. If we were to bring back Serena for one scene, you’d say, ‘No, I want a whole episode about Serena!’ Until you know our characters, we can’t take their real estate away. So we thought of someone we could bring in who wouldn’t overtake the story. I’ve always been obsessed with Milo, having been there when he was invented, and the idea of where he would be now was too delicious to pass up.”

The deliciousness continues when Zoya pays a visit to Milo’s home, where she sees pictures of Georgina with all of her celebrity friends. But the pièce de résistance is the photo at the center of the display: Blair effing Waldorf.

“The idea that Georgina has a shrine to Blair in her house is just so much fun,” Safran says. (Editor’s note: Yes, yes it is.) “Of all these people she’s around in her life, her target is still Blair. She has to see Blair’s face every day to energize her. Or to be inspired to do evil.”

And you’ll be happy to know that Milo isn’t the last face from the original series that you’ll see in the new Gossip Girl.

“There are more returning characters coming,” Safran says. “We’re shooting an episode [for the second half of the season] in which multiple returning characters will hopefully appear. We haven’t closed their deals yet, so I say that with a grain of sand and a prayer, but yes, we’re going to have a lot of fun.” (Disclaimer: This interview was conducted on July 7.)

What did you think of Milo’s appearance in Episode 4? And which other original Gossip Girl characters do you hope to see in the reboot? Drop a comment with your thoughts below.