Christmas came early on Thursday with the latest episode of American Horror Stories, a cautionary tale of fame, murder… and Santa Claus.

The gruesome hour introduced us to the “Bro House,” a group of influencers — Zinn (Nico Greetham), Wyatt (Charles Melton), James (Dyllón Burnside) and Barry (Kevin McHale) — willing to do anything for more subscribers, from filming a stranger’s suicide to revealing the truth about Santa to a group of unsuspecting children at the mall.

That second offense led to their undoing, as this particular mall Santa (Danny Trejo) turned out to be a straight-up serial killer who promised, “You’ll get what you deserve.” He then proved to be a man of his word by breaking into the Bro House and killing the influencers one by one. I really have to commend him on his festive decorating; I would never have thought to use Zinn’s head as a Christmas tree topper, nor have I ever considered subbing in traditional ornaments for severed limbs. The creativity!

But while the members of Bro House got what they (mostly) deserved, Trejo’s killer Claus lived to slay another day.

Below, McHale takes TVLine inside “The Naughty List,” including the “trauma” that linked him and his co-stars forever:

TVLINE | First of all, congratulations on hitting 5 million subscribers. I’m sorry it came at such a high price.
Thank you. It’s all right, the real reward was just getting murdered.

TVLINE | You just answered my next question. A lot of people on Twitter are asking if Barry actually died. Can you confirm that?
Well, it’s funny. I was watching it with some friends over at my house, and they were also like, “Wait, did you actually die?” And I said yes. I think Barry died. It’s ultimately up to Ryan Murphy, though, he can always reverse that if need be.

TVLINE | This is a rare occasion that I agree with a popular opinion on Twitter. It seems like most people didn’t want Barry to die. He was the one “good” one.
He’s only good in comparison. [Laughs] My thing is that he was still there, he still chose to film and upload these horrible videos. Just by proximity, he’s still a douchebag.

TVLINE | Did this give you any new insight into the life of an influencer?
Honestly, I did feel like my brain was frying a bit. I love TikTok, but I don’t subscribe to this particular brand of influencer. Nico and I watched so much of it that it not only messed up our TikTok algorithms, but we’d wake up thinking about it.

TVLINE | You might need to make a new account just to fix that.
I think I’ve actually gotten it back. Now it’s just people coming out as bisexual and, like, science things. So I’m happy with that.

TVLINE | Weirdly, this is not the first time you’ve played a character who was burned alive.
[Laughs] You might be the only person to make that connection, yes.

TVLINE | How would you say this experience compared to working on True Blood?
I actually got to film this death, at least. When I did True Blood, I found out from someone working in the wardrobe department who was like, “So, you die in the next episode.” I was like, “What?” I had no idea! And I was so excited to film it, but I was never called back, and then I saw that my character was dead in the next episode. I did think about that a lot, though, because it was the only time I had gotten to play in the horror/spooky world.

TVLINE | This was also your second time playing someone named Barry, but I imagine this was nothing like your experience on We Bare Bears.
[Laughs] No, it was quite different. But they were both villainous. The characters on Horror Stories were not people you were rooting for, and neither was the cartoon bear.

TVLINE | I don’t know, people seem to be rooting for Barry. The consensus online is “Protect Barry at all costs… and kill everybody else.”
And quickly! That was our goal, too. We wanted these characters to be awful. But the thing is, Dyllon, Charles and Nico are the nicest, sweetest people that are so the opposite of these characters. So we really had to try to be as douchey and unlikable as possible. 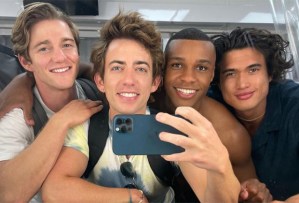 TVLINE | Did you already know the other members of the Bro House, or was this your first time meeting them?
I’ve been friends with Nico for a couple of years, so when Ryan [Murphy] originally told me about this, he said, “I want it to be you and Nico.” And that’s all we knew for a couple of months. It was my first time meeting and working with Dyllón and Charles. I never realized how funny Charles is. I’ve obviously watched him on Riverdale, but he’s one of the funniest people I’ve ever met. I laughed during so many takes because of him, and I was so happy that he got to shine and show this super comedic side.

TVLINE | Do you feel like you all formed a lifelong bro-nection?
I think so. I’ve never used the word “bro” so many times, and we were all hoarse from shouting. I hated myself after every single take. And I think when you go through that sort of trauma, it links you forever.

TVLINE | You must have had to film so much for those Bro House montages. Was there anything we didn’t see?
There was a lot more scheduled that we didn’t get to shoot, but I think almost everything we shot ended up in there. When were shooting the bigger scenes, one or two of us would go film the prank stuff. We were trying to squeeze in as much as possible. The bong stuff, the ice bucket challenge, all of those things were filmed so quickly. It was like, “OK, let’s go spit on each other, and then you’re going to run into Saran Wrap.” There was never a dull moment.

TVLINE | And we haven’t even talked about Danny Trejo, who was truly terrifying. What’s he like when the cameras aren’t rolling?
He was super nice and friendly and talkative, but I was nervous to talk to him. He’s a legend. When I told my family he was going to be in it, they were going on and on about him. I had no idea my brothers and my dad were so obsessed with him. I was just trying to hold back talking to him like, “I have your food all the time! I love Trejo’s Cantina, and your horchata is great because I’m lactose intolerant and it’s vegan!” He’s not in that much of the episode, so we only worked with him for a few days, but I tried to be around him as much as possible.

Your thoughts on American Horror Stories‘ very special Christmas episode? Grade it below, then drop a comment with your full review.