Gary and Andi are weaving such a tangled web on Tyler Perry’s Sistas. This week on the soapy BET drama, Andi forced her way into their master bathroom and found her fiancé… on the phone with his therapist, Angela. Huh?!

We know moans when we hear them, and that woman was clearly moaning. So what kind of therapy is this, exactly? Sexual healing? While Gary and Angela’s “session” is far from the smoking gun everyone wanted — small spaces are better? Whatever — here’s hoping that Andi is at least paying closer attention to Gary, Angela and their style of therapy.

Even though Andi didn’t catch Gary cheating, she still lied to him about meeting up with Robin, the attractive opposing counsel on her most recent case. Gary said he trusts Andi, but he doesn’t trust other men. (OK, Gary.) To be fair, Andi was meeting up with her girls… but then she met up with Robin afterward. What is going on? Why are these two still together if all they can do is lie? 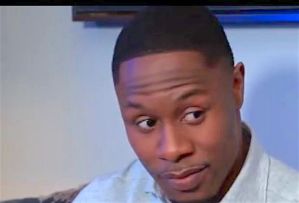 This is sort of what Fatima alluded to when she asked Andi why she switched locations on her rendezvous with Robin. She also asked Andi, her boss and friend, if she didn’t want to meet up at the hotel because she didn’t trust herself around Robin. But Andi said she switched locations because it made things easier and she would no longer feel like she was lying to Gary. Oh brother.

Later, when Andi arrived at the bar where the girls were hanging out, she and Karen were still wallowing in their awkwardness. Karen apologized for leaving Gary’s surprise wedding, and Andi accepted. Andi said she didn’t marry Gary, and Karen said she knew already and thanked God that they hadn’t tied the knot.

An offended Andi asked Karen to clarify her snarky comments, and that’s when Karen pulled out her subpoena from Jasmine, Gary’s ex-wife. At the end of the paperwork, Jasmine revealed that she is currently incarcerated for shooting Gary and attempting to do the same to Andi. 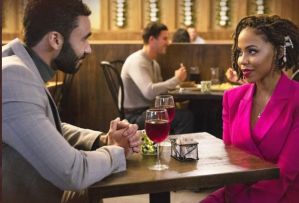 The only problem is, Andi never bothered to tell her girls about the shooting, the rubber bullets or Jasmine’s arrest. Whoops! Now Karen, Danni and Sabrina are miffed with Andi and her lies of omission. To make matters worse, Jasmine is suing them all.

Just when the night seemed like it couldn’t get any more dramatic, Andi and Robin started drinking wine and flirting at a table away from the girls. They were having a great time too, until Gary showed up in his pinstripe jogging pants looking confrontational and acting all kinds of crazy. Awkward!

Do you think Gary has a right to be suspicious of Andi and Robin’s after-hours chat, and will the girls have to step in and save Andi yet again? Drop your thoughts in a comment below.