One of the central tenets of David Makes Man is brotherhood, and that’s exactly what fans of the OWN drama got to experience in Tuesday’s episode when Seren made his grand return.

The palpable joy that brightened Adult David’s face upon seeing Seren for the first time in years could practically be felt through the screen. In turn, his long-lost best friend came back at just the right time to give him assist after assist and, most importantly, to remind him that he’s not alone.

“Seren and David’s friendship is super important, especially for Seren,” Nathaniel Logan McIntyre, the actor who plays Young Seren, tells TVLine. “He went through all of those traumatic experiences at home with his parents, and he didn’t really have anyone except David, who was his only somebody. He was always there for him, looking out for him and wanting to help him. And he ended up helping Seren, which is beautiful.” 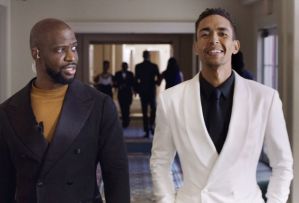 The only problem is that in helping Seren escape his abusive home life, David lost his person after they lost touch. And they did not reconnect for nearly two decades. As adult Seren (played by Kyle Beltran) explained, he had to keep a low profile so that his mother and stepfather wouldn’t find him. By episode’s end, it was David who was asking Seren for his much-needed help to get his life back on track.

“I really do love their friendship,” McIntyre says. “That’s his brother and best friend and the only person who was there for Seren, so of course he’s going to repay the favor and help David any way he can because Seren puts others before himself. And David is the family he gets to choose.”

David and Seren’s bond is also something that isn’t readily explored within Black male friendships portrayed in mainstream media, particularly when one friend is gay, Beltran says. “It’s an incredible brotherhood and one you don’t get to see that often on television.” 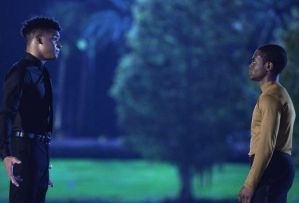 McIntyre adds that he’s friends with Akili McDowell, aka Young David, in real life and their bond shines through in every scene they share — especially in this week’s Episode 6.

“He’s like a brother to me,” McIntyre divulges. “I want to see him win and make it in this industry. That’s my guy. Taking our friendship and implementing it into the show was very important. He’s a great scene partner, and I love working with Akili.”

As Season 2 continues, McIntyre and Beltran say fans can expect David to keep evolving as a man, thanks to the fortifying friendship he shares with Seren.

“Trauma is a very real thing, and Seren has moved past his trauma in a way that David has not,” McIntyre explains. “But they can help each other so that David can become the man he’s supposed to be.”