Roswell, New Mexico returned for its third season on Monday, but judging by Maria’s troubling vision of a funeral, at least one key character won’t live long enough to see Season 4.

So, who’s in the casket? Max seemed like an obvious candidate, especially after he revealed that his body is rejecting Noah’s heart — a secret he’s apparently been keeping to himself for a full year. Michael and Isobel were furious, of course, but their rage eventually gave way to desperation as they turned to an unfriendly source for support: Max’s doppelganger Jones, who claims to be “the savior” whereas Max is allegedly “the clone.” (Confused? Join the club.) 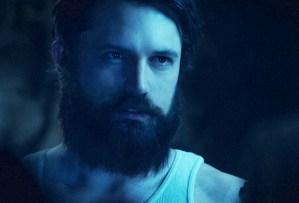 Fortunately, a second vision — which came to Maria after she was assaulted at the Wild Pony by a group of men in alien masks — revealed Max to be at the funeral, putting him in the clear for now. But with answers came more questions, as this follow-up vision also included Alex blabbering about how they’re “covering up another murder,” just like with Noah. In short, the mystery continues.

Meanwhile, Liz has been doing some groundbreaking research in Los Angeles, the kind of work that could help paraplegics learn to walk again. But when she found out that her research would be put towards — wait for it — anti-aging creams, she leaked the patent and sabotaged her whole endeavor. With the help of her new research partner Heath (played by The Originals‘ Steven Krueger!), she was able to sneak back into the lab and cover her tracks… a victory she and Heath celebrated by doing a slightly different type of exploration. If you catch my drift.

* After spending a year cleaning up his father’s mess, Alex was welcomed back to Roswell by Forrest, unaware that Michael was watching their reunion through tears from across the street. (Because of course he was.) Following an afternoon quickie, Forrest revealed that he’s been recruited by Deep Sky, a top-secret organization Alex immediately dismissed as “paramilitary murderers.” What’s more, the group also wants to add Alex to its ranks at “E-level clearance,” whereas most recruits being at “A-level.” After a heart-to-heart chat with Kyle, Alex chose not to join Forrest on the next bus out of town — but something tells me Big Sky won’t take no for an answer so easily.

* Following a close encounter (not of that kind) with Wyatt Long at art therapy, Rosa was later attacked by him at the Crashdown Café. She barely escaped with her life, jabbing him with a needle before he got a chance to shoot her. Come to think of it, could Wyatt be the one in the coffin?

Your thoughts on Roswell, New Mexico‘s long-awaited return? Grade the episode below, then drop a comment with your theories about who’s in that damn coffin.