Game of Thrones‘ Grey Worm himself, Jacob Anderson, has booked an appointment with Doctor Who.

The timey-wimey sci-fi drama announced on Sunday at its Comic-Con@Home panel that Anderson will make his debut in Season 13 as a new character named Vinder. 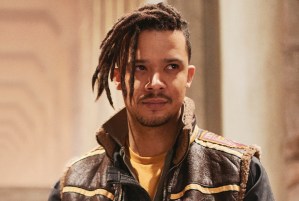 Above, you can watch a teaser for Season 13, which will arrive later this year.

The previous addition of Bishop — a comedian and former footballer whose acting credits include the UK miniseries Fearless and a few episodes of Skins — was announced earlier this year. Bishop is playing a man named Dan, who seems poised to be a new companion. (The character’s first, fleeting appearance closed out a 70-minute holiday special that marked Bradley Walsh and Tosin Cole’s final episode as companions Ryan and Graham.)

“As Dan becomes embroiled in the Doctor’s adventures, he will quickly learn there’s more to the Universe(s) than he could ever believe,” reads a teaser for Bishop’s character. “Traveling through space and time alongside the Doctor and Yaz (played by Whittaker and Gill), he’ll face evil alien races beyond his wildest nightmares.”