At last, The Walking Dead has disclosed the identity of the actor who’s been cast as Pamela Milton, the cunning but neurotic governor of the network of communities known as the Commonwealth. Or, as you may think of it thus far, the home of the stormtroopers. And that actor is…

Laila Robins, whose mile-long list of television credits runs the gamut from Showtime’s Homeland to Amazon’s The Boys. What’s more, the AMC drama, which kicks off its supersized final season on Sunday, Aug. 22, at 9/8c, announced during its Comic-Con @ Home panel Saturday that Commonwealth bookkeeper Lance Hornsby will be played by Josh Hamilton, who’s appeared on everything from Absolutely Fabulous to Madam Secretary, from 13 Reasons Why to This Is Us. (Still no word, though, as to who will be playing the key role of Pamela’s son Sebastian, who in Robert Kirkman’s comic-book series kills Rick Grimes.) 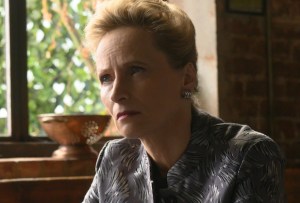 In addition to the new hires, The Walking Dead dropped its official Comic-Con trailer during its panel; when else would it, right? You can watch in full by pressing PLAY on the video above. Then hit the comments with your hopes and fears for Season 11. What does the series have to get right to stick the landing? And who do we most need back?