It all started with a simple request.

On Wednesday’s episode of Tyler Perry’s Sistas, Andi asked Fatima to swing by her place to grab a dressy outfit for her evening business meeting with Robin, the attractive opposing counsel on her latest case, and Fatima agreed. She also told Fatima on the low that she wasn’t going to tell Gary about Robin until the time was right. Who is Andi kidding? She knows her relationship with Gary is all but over, and she’s attracted to Robin. Girl. Run, don’t walk in Robin’s direction.

Before Fatima left for Andi’s place, she carved out a few minutes to call Zac and apologize for yelling at him after their passionate night of lovemaking. But really, what is Fatima apologizing for? Zac was the one trying to sneak out without saying goodbye. Did Fatima overreact a little and wrongfully accuse Zac of still being in love with Karen? Yes. However, Zac wasn’t being fully transparent, either.

Sadly, the apology call didn’t go much better, and the minute Zac mentioned that Hayden was doing him dirty on the job, Fatima grew angry and started plotting revenge. Zac hung up, and Fatima called Hayden and invited him to her home. Oh, God. What is Fatima going to do to Hayden? 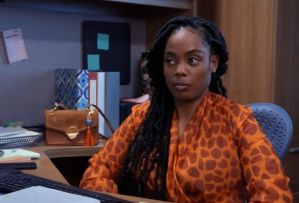 Over at the bank, Karen fretted about Jacobi suing her and her employers for a made-up sexual harassment case. Sabrina is innocent, of course, but she’s afraid of the public humiliation and possibly losing her job.

In a rare moment of sympathy, Maurice took Sabrina out for drinks at his favorite gay bar — does this man go anywhere else?! — and cheered her up. Sabrina even learned that Maurice shared a similar background as Q, the check thief, because just like Q, Maurice’s super religious mother threw him out at age 14 when she learned he was gay.

Back to Gary and ‘nem. Fatima finally made it to Andi and Gary’s place, and as she was putting together Andi’s cute hot pink ensemble, she heard moans coming from the couple’s bedroom. The moans sounded like a man and a woman, so we guess that eliminates Aaron (humph), but who could it be? His ex-wife Jasmine? His therapist?

Wisely, Fatima didn’t barge in on the lovemakers. She instead called Andi and told her to rush home to see what was going on in her bedroom behind her back. Sigh. Here’s hoping when Andi gets home and learns the truth, she finally leaves Gary’s raggedy ass alone.

Who do you think is in there moaning with Gary, and what should Andi do? Feel free to drop your thoughts in a comment below.