Ahead of All American‘s Season 3 finale, we thought the episode’s biggest question would be who won the football state championship. But another, more serious question loomed much larger at the end of the hour: Is Coop going to die?

Unbeknownst to Coop, Mo has been orchestrating her downfall all season, culminating in an attempt to get Coop busted for drug possession during Monday’s finale. But Coop could tell that her new merchandise manager, Andre, was up to something, and she found the drugs he was trying to sneak onto her Vegas tour bus before the vehicle even left town.

That night, after the tour bus had been stopped and searched by the DEA, Coop paid Mo a visit, revealing that she’d had her eye on Andre all along and foiled Mo’s plan to put Coop in jail. Mo then raised a gun at Coop, and Coop tried to persuade her that avenging Tyrone would only cause Mo more heartache; Coop, of course, knew that better than anyone.

A tearful Mo initially lowered her gun, prompting Coop to ask, “We good now?” Then, Mo raised her weapon at Coop again — and though Preach intervened at the last second to shoot Mo from behind with his own gun, Coop revealed to Preach that she, too, had been shot in the abdomen. Preach ran over to Coop, trying to keep her conscious as she lost a lot of blood…  and the episode ended as he attempted to save her. 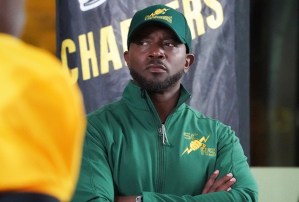 * Spencer and Jordan were both invited to play in the Platinum All-American game, an event reserved for only the top high school football players. But when Spencer revealed to Coach Baker that he’d been practicing with Jordan for weeks — before Jordan had been medically cleared to return to the field — Coach Baker was hugely disappointed and betrayed.

Even worse, just before the state championship game, Beverly High and South Crenshaw broke out into an enormous fistfight with one another, for countless reasons: Crenshaw was mad at Spencer for helping Jordan practice, Jordan was also mad at Spencer for spilling the beans to Coach Baker, JJ and Jordan were at odds over who should be starting quarterback, yadda yadda yadda. Fortunately, with a couple of fibs from Coach Baker and Coach Montes that the fistfight wasn’t actually that violent, the championship game was held as planned, though we didn’t actually see the game take place before the episode wrapped.

* In other disappointing football developments, Asher learned he has a heart condition called cardiomyopathy, and it prevents him from playing the sport ever again. Even Coach Montes cries over the news!

* Layla gently suggests to Carrie that she should visit her parents, if only to reassure them that she’s safe and well; Layla even agrees to accompany Carrie on the visit, on their way to a mini-vacation at Layla’s dad’s house in Tahoe. But before she and Layla leave, Carrie pens a suicide note that she leaves on the kitchen counter, implying that Layla plans to take her own life, too. Layla’s father finds the note and tries to call Layla… but he finds his daughter’s cell phone in the trash, where Carrie clearly stashed it.

OK, your turn! What did you think of All American‘s season finale, and that doozy of a cliffhanger? Grade the episode in our poll below, then drop a comment with your full reactions!