When Cecily Strong’s Melissa and Keegan-Michael Key’s Josh first wander into Schmigadoon!, the harmonious haven at the center of Apple TV+’s musical satire, neither they nor the audience knows exactly what to expect. That’s why it was vital that the opening number hit all the right notes.

“Initially, I wrote a song that was kind of the lazy, bouncing, musical theater ‘Welcome to Our Town’ song, and it stayed that way for a little while,” executive producer Cinco Paul tells TVLine in the video above. “But then there was a point where I thought, ‘I need to be tougher on myself and more rigorous about this,’ and ‘the more specific the number is, the better…’ I really dug into the Oklahoma! and the Wizard of Oz of it all, as you can probably tell, and that’s what really unlocked the song for me.” 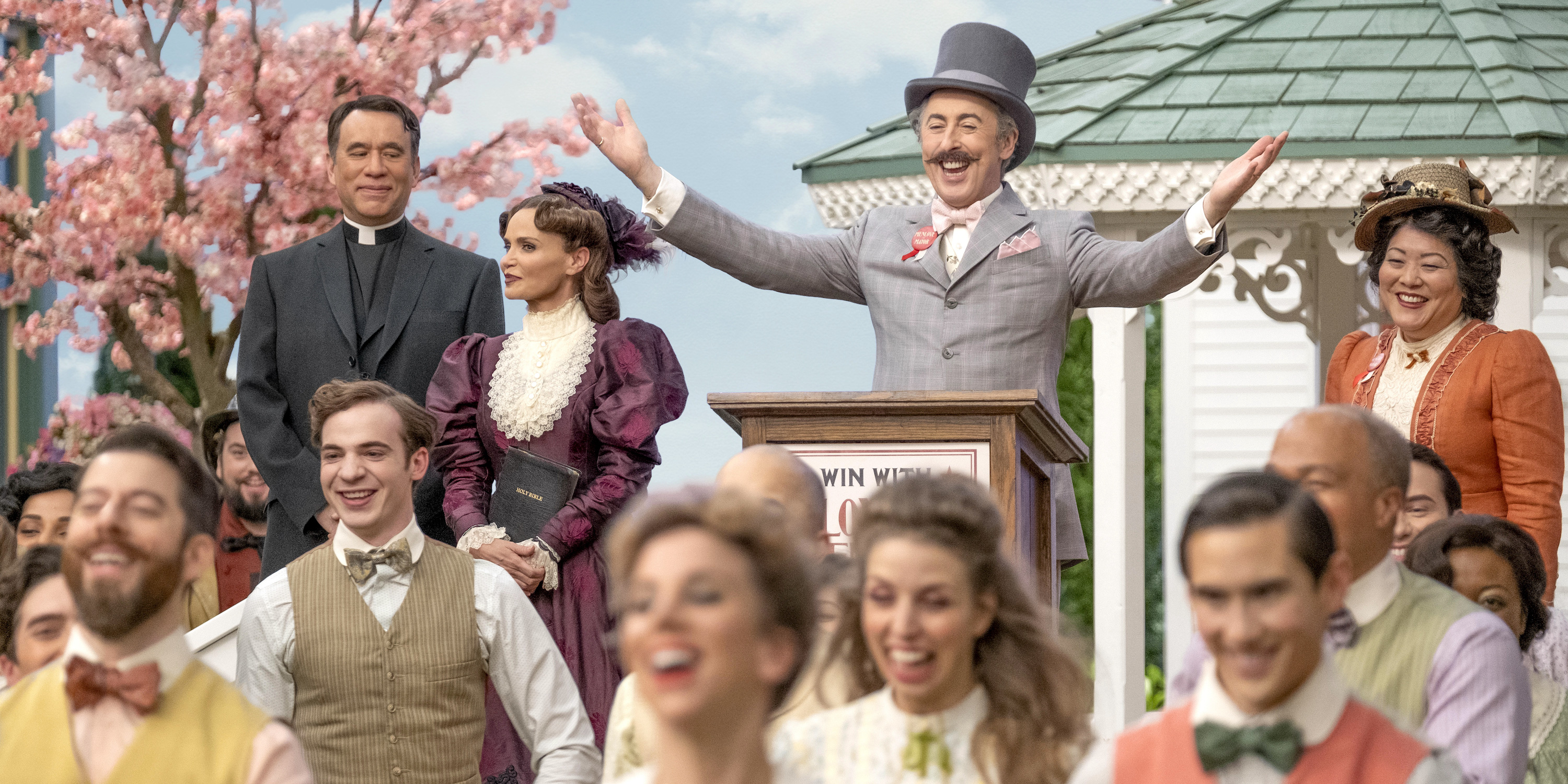 The performance not only introduces most of the ensemble — an embarrassment of riches that includes Alan Cumming (The Good Wife) as the closeted Mayor Aloysius Menlove, Fred Armisen (Saturday Night Live) as Reverend Layton, Kristin Chenoweth (Pushing Daisies) as town scold Mildred Layton, Aaron Tveit (Grease Live) as “rapscallion” Danny Bailey, Dove Cameron (Descendants) as ditzy farmer’s daughter Betsy, Ariana DeBose (Hamilton) as schoolmarm Emma Tate, and Ann Harada (Avenue Q) as the mayor’s devoted wife Florence — but establishes the series’ aesthetic from that point forward. To get it right, Paul worked closely with fellow EP and Emmy-winning director Barry Sonnenfeld (Pushing Daisies), who shared a vision for what the song-and-dance routine should look like.

“My aesthetic came from watching a lot of musicals: Singin’ in the Rain, Carousel… you know, all the usual suspects,” Sonnenfeld says. “You want to embrace the way those old MGM musicals were shot. They were all pretty much on an axis. You could see whole figures, not just insets of toes and stuff like that.”

Perhaps hardest to perfect was the choreography, which had to be mastered on a second soundstage due to COVID protocols. 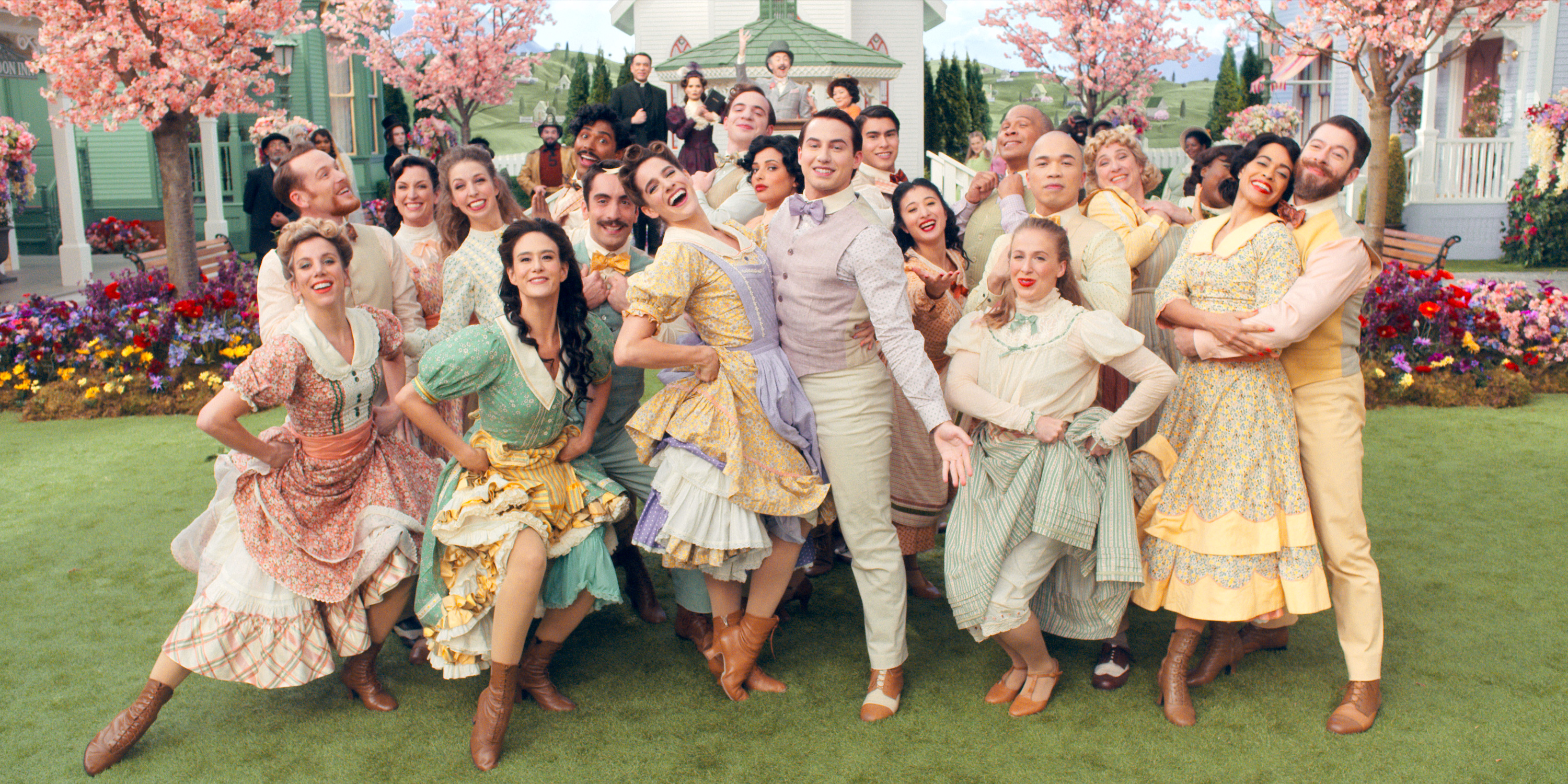 “The choreographer [Chris Gattelli] had a group of core dancers wearing masks, so you never knew what character was who under the mask,” Sonnenfeld recalls. “They would film rehearsals on another stage, and then at night, Chris would send [recordings] to myself and Cinco, and we would talk. I would say, ‘I don’t want to pan, I want to track.’ ‘I think the framing is too wide, we should do this.’ ‘I don’t think we need that cut, I think it would be better if we pulled back.’ And then we’d give those notes to Chris, Chris would re-choreograph it, he would film it again, and we would [provide additional feedback].”

On the bright side, “by the time each day came to actually filming on the real set, it was a piece of cake,” Sonnenfeld says. “Because we had rehearsed it so much, we had seen the rehearsals [and] we had cut the different angles together, we knew exactly where we were going to use what shot. So, like that huge dance number — the opening number — we probably finished that three hours ahead of schedule.”

Watch the Q&A above for more insight into Schmigadoon!‘s title track — as well as the delicate line the series must walk as both a “love letter” and a deconstruction of Golden Age musicals — and weigh in on Episode 1 via the following polls.