One monster comprised of bodies and souls. One absolute nutcase hell-bent on murder. One grieving widow. Zero rules.

Heading into the series finale of Lisey’s Story, our titular heroine is in for the strangest royal rumble of her life. But with a strong will to live and the love of her late husband by her side, Lisey is through running from Jim Dooley, the stalker who’s been threatening her life, all over her husband’s unpublished work. This is when she must fight back to put a stop to the madness once and for all… or die trying.

So how did this latest Stephen King adaptation wrap up? Read on for a full recap.

At the top, Lisey’s deep inside the Boo-ya Moon, luring the Long Boy out as she slowly makes her way toward the pool. Also lurking in the darkness is Dooley, and that maniac’s looking to make her bleed once again.

The nemeses find each other, and both stare up at the behemoth above the tree line. Before a word can be spoken, Lisey smashes his face with her shovel, and a violent tussle ensues. He grabs her hand, breaking a metacarpal bone, and then (gross alert!) bites down hard on it. He goes to headbutt her (what’s with this dude and heatbutting?), but she blocks it with the trusty shovel. 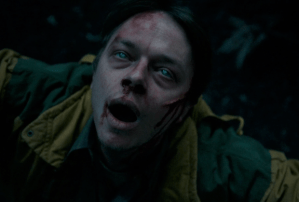 As the Long Boy approaches, Dooley looks up and shouts: “I am the son of Scott Landon. I am a prophet. I am the lighthouse. Beam me up, Scott,” he says, arms raised above his head. The monster picks the psychopath up and drops him on the ground. Like a cat with a mouse, he picks him up again, and crushes him in his hand. Dooley screams in pain as he’s torn apart by the rest of the bodies that comprise the Long Boy. Aaand that’s Lisey’s cue to bounce outta there, ASAP.

She wades into the pool, past the series of ghostly onlookers. Then, she’s transported back in her bathroom. The sisters all embrace. “He’s gone,” she tells them. “Scott was there for you, guiding you all along, wasn’t he?” Amanda asks. He was, Lisey responds.

Outside her home, in her actual pool, Jim Dooley’s mangled, dismembered body parts float in the water. She bags up the pieces and drives them out to a river. Piece by piece, she drops what’s left of Dooley into the rushing water below. Then, she calls the police to report Officer Beckman’s murder.

The next day, Officer Richards is suspicious that Lisey didn’t ask about Dooley. He says that since Dooley shot Beckman down “like a dog,” he wouldn’t cry himself to sleep if something happened to the murderer. Lisey says she doesn’t think anyone would find the body, if so. “Is there something you’re not telling me?” the cop asks. “Yeah,” she says, matter-of-factly.

Later, Lisey asks Amanda about the Shrouded Ones, a.k.a., the creepy people that sit by Boo’ya’s pool. Amanda confirms they’re dead, but they’ll soon go on. Some will hold on, though. At least for a little while.

Lisey visits the Boo’ya Moon one last time and follows a string on the ground to a box that has a message. It reads, “Bool! The End!” Inside is a folder with her name on it. She opens it up and written on the first page is “Lisey’s Story, by Scott Landon.”

The story chronicles Scott and his trashbag, sorry-excuse-for-a-father following the death of his brother, Paul. After Dad forces him eat a moldy sandwich, he tells the young boy to be brave. He also promises not to hurt young Scottie anymore. (But Dad’s also hallucinating that he hears his dead son around the house, soooo yeahhhh.)

Dad sends Scott on another Bool Hunt, and as the boy races around collecting clues, Dad sticks his shotgun into his mouth. Rather than blow the back of his skull out, he grabs a bottle of vodka, chugs half of it, and smashes it on the ground. When Scottie arrives to the last clue, it reads: “Kill me. Put me with Paul. Please Scott.” Dad, meanwhile, is passed out drunk on the couch. Little Scott gets a pickaxe and goes to work. He heaves the tool deep inside his dad’s gut. Using a tractor and some rope, he pulls the bloodied body out of the house, and tosses him down the well. AND HE DESERVED IT, TOO. (I said what I said!) The next day, the boy tells townsfolk that his dad up and left with his brother, and that’s when he was entered into the child welfare system. 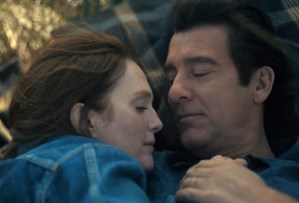 Telling Lisey the last part of the story finally sets Scott free. “You’ve been the anchor that has held me in this world all along,” he writes to Lisey. “You were always saving me, Lisey, so I left you a bool hunt so you could save Amanda… but mostly I left it so you can remember and go on. That’s your real prize. And now that you have all of me, I know you can.”

Still in the Boo’ya Moon, Lisey grabs her shovel and walks right on up to the Long Boy. “I need to see him one more time,” she tells the monster. She gives the creature the shovel, and surprisingly, it doesn’t follow her back to the pool. She finds Scott’s afghan on the stairs, but he’s already in the water, standing with a shroud over his head. He calls her “Babyluv” one last time, as we’re treated to a montage of Lisey and Scott’s life together. A life of happiness, hope, love, milestones. We cut back to the Shrouded version of Scott as he submerges himself deep into the pool’s water and disappears. Lisey wraps herself up in the mustard-colored afghan and sits, remembering a childhood of happiness she shared with Amanda and Darla.

We cut to her bathroom, and she turns the sink off one last time. Her sisters are there to greet her. “He’s gone now,” she tells them. “But I’m not.” They all exit the den, and surely enough, the lighthouse in the corner eerily turns itself on. It rotates a few times, piercing the darkness with its blindingly bright light before turning off.

What did you think of this very loaded finale? Grade it (and the series) below, then let us know your thoughts in a comment.