If the best-laid plans can go awry, then certainly, so can things that weren’t remotely planned — like the baby that Animal Kingdom’s Craig and Renn find themselves parenting in Season 5 of the TNT hit (Sundays, 9/8c). “They’re sort of adjusting to this really on the fly,” showrunner Daniele Nathanson tells TVLine.

To put it mildly, it won’t be easy. For one thing, “Renn wants to keep certain aspects of her life — like what she does for a living,” the EP teases. “And that’s going to be a conflict, because from her POV, yes, she has a kid, but that doesn’t mean she’s changing her whole life. In the animal kingdom, you just keep moving forward as who you were before.”

Which you would think would ring familiar to Craig, given that he was raised by a mother who was nobody’s idea of a Donna Reed stand-in. “Smurf was, of course, a badass. However, she made dinner every night,” Nathanson notes. “She was traditional in some ways. 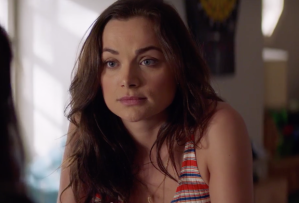 “And now that Craig’s a father,” she adds, “he may be romanticizing her a little bit,” forgetting her manipulations and recalling her (cough) nurturing. “Like in Episode 1, he talked about lasagna. He’s sort of thinking warm thoughts about motherhood, and he’s comparing Renn and Smurf and their mothering styles.”

All together now: That can’t go well. “Renn’s not the type of woman who’s going to be baking pies,” Nathanson laughs. “I mean, she’s a better person than Smurf, but I think Craig, because he simultaneously lost his mother and had a child she never got to meet, is filled with confusion.”

What do you think, Animals? Will Craig be able to step up and be the father that Nick needs and the partner that Renn wants? Hit the comments with your predictions.