You can always count on Gary to make shady moves on Tyler Perry’s Sistas.

On Wednesday’s installment on BET, he ended his call the minute Andi walked into the room. She asked her fiancé who he was talking to, but Gary refused to answer. Making matters worse, he accused her of being jealous. Thankfully, Andi is a lawyer, and she used her professional skill set to slice through Gary’s subterfuge. For starters, Andi said that when Gary was married to Jasmine, he used to wake up early to meet her at the gym behind Jasmine’s back.

Gary, who had just come home from the gym, then accused Andi of doing something “wrong” and said that’s why she was suspicious of him. That, and he didn’t give her the sex she wanted the previous night. Gary then said he had to get ready for work, and he left his phone on the counter. Andi tried checking his phone, but Gary soon returned and retrieved it before she could. See? Shady Gary.

Elsewhere in Atlanta, Karen and Aaron fared slightly better by opening the episode with a steamy love scene. Karen had such a good time with Aaron, she said she saw stars like she was in outer space. Aaron said he may have bumped her dome on the headboard, and they both laughed and snuggled before Aaron said he had to be somewhere and rushed out the door. This confused and frustrated Karen, who wondered if Aaron was deceiving her somehow. 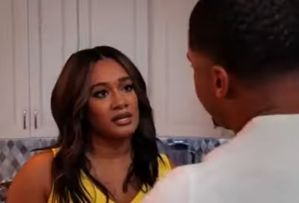 Fatima also wondered the same thing when Zac attempted to sneak out of her apartment after a night of passionate lovemaking. She accused Zac of still being in love with Karen and playing games, which Zac denied. He also accused Fatima of being insane and sounding like Karen before heading to the bank to follow through on his stock market sham.

Of course, it was the same bank Sabrina works at where she had her own woes. Her supervisor heard about Jacobi’s fight with Calvin and said Sabrina had to fire Jacobi. That’s exactly what Sabrina did, but Jacobi was far from happy and all but promised to find a way to hurt her. After all, Jacobi reasoned, he was defending Sabrina because Calvin yelled in her face and grabbed her arm. Later, when Jacobi returned, he said he was going to sue the bank and Sabrina for sexual harassment.

Speaking of Calvin, he hugged Maurice and told him he was proud of him for letting the check thief go. Calvin said the guy is only 24 and is spiraling out of control in a life of crime, which began when his parents kicked him out at the age of 14 for being gay. Maurice refused to take the compliment, however, and decided to flirt with Calvin and say he was going to have Calvin’s baby. Crazy old Maurice. 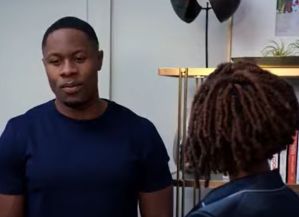 The episode ended with Andi meeting opposing counsel — a very handsome lawyer named Robin — in the conference room. Fatima was all over him, but Andi remained professional because he didn’t offer the settlement she wanted for her client. Ooh, maybe Robin can be Andi’s new boo when she finally kicks Gary to the curb.

What do you think of Gary’s latest deception, and how much longer do you think Andi will stay with him? Drop your thoughts in a comment below.