Francia Raisa’s favorite part of her grown-ish character Ana’s contentious fight with her boyfriend Javi was when she angrily threw his iPad at him.

When Episode 2 of the Freeform comedy’s fourth season airs Thursday at 8/7c, viewers will see the fallout of Ana and Javi’s heated disagreement and why she’s enraged that he thought he might have contacted chlamydia but didn’t — and did not bother to tell her either way. Javi (Henri Esteve) is equally infuriated with Ana for hacking his tablet because she clearly doesn’t trust him. Nomi, Jazz and Vivek also chime in and help Ana along the way.

And if the ire Ana exhibited felt genuine, that’s because it was. Raisa says she was able to tap into her real-life frustrations and raging hormones to give Ana the required amount of fury… and then some.

“While I was shooting that episode, or actually the first couple of episodes, I was in the process of freezing my eggs,” Raisa divulges to TVLine. “I was injecting myself every single day that we were filming. So when I had those scenes when I had to throw the iPad, it felt good.”

“I was so angry and emotional, and I looked pregnant,” adds Raisa, who got to destroy at least two tablets while shooting. “Throughout this season, you’ll see me wearing sweats a lot because I was so self-conscious. But to be able to have those moments where I let someone have it felt good.” 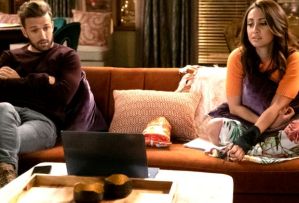 Raisa says it also helped that Esteve understood her personal and emotional rollercoaster. “He knew what I was going through, and he took it,” she says of her small-screen bae, whom she nearly hit by mistake. “Henri was such a champ, and I’m glad it was him I had to work opposite of, because I was an absolute mess. Angry disaster. All of the things. It was fun.”

The actress, whose past credits include Dear White People and The Mindy Project, says she doesn’t regret proactively handling her family planning — even if the timing wasn’t optimal.

“I do recommend that everyone freeze their eggs. Maybe not while you’re shooting a TV show,” Raisa surmises with a chuckle. “That was hard. I was thankful to the writers and also the crew for being so patient with me. I asked the production assistants to please let the crew know what I was going through. I couldn’t remember my lines. The director didn’t know. I was like, ‘This isn’t me. I swear. But can I throw an iPad again?'”