Chase Anthony knows firsthand what it means to bet on oneself.

He took a big risk in pursuing a career in comedy — a gamble that led to a coveted spot in Shaquille O’Neal’s All-Star Comedy Night, as well as appearances on dramas such as Grey’s Anatomy and Lethal Weapon.

He currently stars as Deon Lewis in the series Bigger, which is currently streaming on BET+ and follows a group of thirtysomethings in Atlanta who still don’t have it all together. An Atlanta native himself, Anthony is proud to be a part of a project that accurately depicts his hometown.

“[With] Insecure, we get to see L.A. and you feel the L.A. vibe. We haven’t had that for Atlanta, and we crave it,” he tells TVLine. “Atlanta is like that mecca for Black excellence and entrepreneurship. That’s where most of the Black educated women are, so let’s reflect that. I’m glad that we [have that] on our show. It is the strip clubs, but there are [also] day parties, and [we’re] showing how all this blends together.” 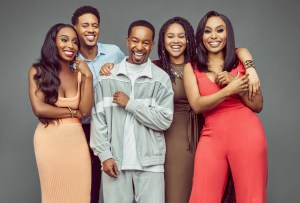 Season 2 ended with the reveal that Deon and his off-again/on-again bae Layne (Tanisha Long) married in secret and still haven’t told their friends. For anyone caught off-guard by that twist ending, you’re not alone.

“I was shocked when I read it,” Anthony shares. “It puts you right back in the seat of an audience member. They left it all open, so we’re now just chomping at the bits to read the script, if anything.”

Anthony hasn’t heard anything about Season 3 — the series has not yet been renewed — but if given the chance, he hopes to explore the fallout from Deon and Layne’s big secret in a potential new season. “I’m curious to see what the parents think,” he adds. “Layne and Dion’s moms, neither one of them is light-hearted. They say what’s on their minds. They’re pitbulls in a sense because they’re protecting their children, but in a very aggressive way.”

Starring in a TV show that resonates with audiences means navigating a strange world in which the lines of reality and fiction are blurred. Sometimes Anthony is mistaken for his on-screen persona, which he views as a job well done.

That’s not to say Anthony himself isn’t prone to being starstruck. The actor admits that he couldn’t even look Michael K. Williams in the face when meeting him at an event because of how intimidating the TV vet was in The Wire. That’s also the reason why you’ll never find him voluntarily meeting Tony Todd, who starred in the 1992 horror classic Candyman — a film that still haunts him to this day.

“I’ll never talk to him. I’ll never see him out and about,” Anthony jokes. “[He’s] had a plethora of movies, but I would never go to [him]. I would never say, ‘Hey, you’re one of my favorite actors.’ I think that he nails it, that’s why he’s had so many movies. But man, he’s scary.”