Warning: The following contains spoilers for Tuesday’s jaw-dropping The Haves and the Have Nots. If you’d rather not be braced for its shocks by reading this recap before watching, make like Veronica around a kind word and move away.

“You can’t kill me,” The Haves and the Have Nots’ Veronica declared in Tuesday’s penultimate episode of OWN’s insane — and insanely addictive — Tyler Perry soap. “I don’t die.” And though she all but dared the fates to prove her wrong, she wasn’t actually the character that the hour put in the greatest immediate danger. Hell, she barely made the Top 4! Who ended the episode seeming like what they were gonna have was a funeral and have not was a pulse? Brace yourselves as best you can, and read on. 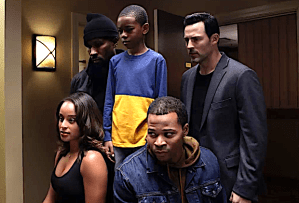 ‘MOMMY, WHERE HAVE YOU BEEN?’ | As the jam-packed hour began, Candace was horrified to realize that her late lover, Oscar, wasn’t alone in her motel room. With him were Erica, War, Quincy and Q! “You deserve to die,” hissed Erica. “We all hate you, bitch.” Yeah, Candace picked up pretty fast on the fact that her old enemies weren’t visiting to reminisce and say bygones. Thankfully, Benny soon awakened his sister from her nightmare. At David’s, after Leo manhandled Wyatt into submission, the judge rang Jim to let him know the whereabouts of his prodigal son. Hilariously, Jeffrey got jealous when Madison tended to the security guard’s injured hand. Too cute. Meanwhile, Wyatt complained that the lovers were making him sick. Though it also could’ve been the buckets of drugs that he’d done. Just then, up rolled Veronica with William in tow. “This is gonna be fun, girl,” she smirked to her old flame.

When David and Jeffrey went outside to see the madwoman, she gleefully introduced William as her son’s father. “I had to pull him out of a gay bar,” she added. “That’s probably where you got it from.” David tried to write off his ex as crazy — and it wasn’t hard as she repeated and repeated, “He’s your daddy” — but she was intent on making a scene… to the point that her former husband threatened her. “You can’t kill me,” she scoffed. “I don’t die, but you do” — and so had Erica. And Maggie. “Your day is coming,” David warned Veronica, who only laughed off the risk posed by Jim’s hitman and went on to offer Jeffrey DNA-test results proving his paternity. Once back inside, Jeffrey noted to David that William did look like him. His mother wouldn’t really go that far, would she? Oh, Jeffrey, it’s as if you’ve never met Veronica! “Who the hell cares?” asked Wyatt, focused as ever on himself. When David excused himself to make a call, Jeffrey and Madison left Wyatt under Leo’s watchful eye. What happened to you? Wyatt asked Jeffrey. “I got over you,” he replied. And it had only taken him 200 times longer than it had taken any of the rest of us! In Jeffrey’s bedroom, Madison reassured his boo that he didn’t need to be jealous of Leo. And they weren’t in a relationship, anyway. Or were they? “What if I wanted more?” Jeffrey asked. “I do like you.” Then, they could see what happened… in time. After that, Jeffrey just recapped his interaction with Veronica, at which point Madison suggested that he test his DNA against William’s. Jeffrey was reluctant, though, for fear that it would hurt David. 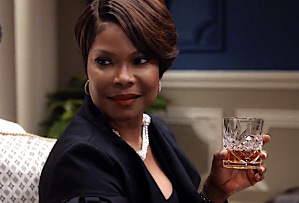 ‘YOU’RE A LITTLE DEMANDING FOR MY TASTE’ | When Veronica got home after a long night of villainy, she called out to Laura for a drink — and the con artist just happened to be standing around with one at the ready. No sooner had the queen of mean taken her first sip than in came Marco to lie that Akil was as dead as any shred of humanity in her. When the assassin balked at the notion of waiting an hour for his payday, Veronica tried — in vain — to seduce him, then sauntered upstairs to get the cash… which naturally she had just lying around. (What, don’t you keep thousands in a shoebox?) At the Iron Bone, Mitch, post-beating, urged Uncle Vinny to let it go. But he wasn’t inclined to do so for the kind of vague reasons that he tends to have. When Mitch moved to warn Benny that Sandy was coming to kill him, Vinny stopped him. “Have a drink, relax,” he told Mitch. “You should have [a shot]. Your friend’s about to have two or three.” 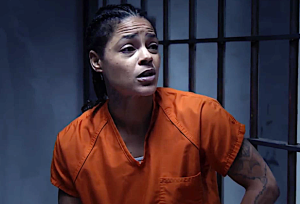 At that, Sandy walked past — OMG, he hadn’t even left yet?!? Mitch pleaded some more to spare Benny, and Vinny said no some more. Finally, Mitch told Sandy how confused he was — Sandy hated Black people, yet his girlfriend had been Black. “Half-Black,” Sandy clarified. I can’t even with this bunch. Lord. Finally, Vinny challenged Mitch to go against him if he wanted to so badly. When he wouldn’t — couldn’t — the mobster ordered Sandy to go and get the job done already, and make it extra bloody, thanks. In lock-up, Katheryn was surprised to find that she suddenly had a cellmate and immediately set about ingratiating herself. Hell, the cell was scarcely locked when Katheryn had her new roomie threatening to beat her ass. Before long, the new kid on the cellblock had decided to make Katheryn her bottom bitch. Apparently never having watched a prison movie or talked to any of the cons with whom she associated, Katheryn had no clue what that meant. And no matter how much she yelled at the guard, the guard remained as unmoved as we would be if we had Wyatt yelling at us for more drugs! More drugs! As the cellmates’ getting-to-know-you chat concluded, the younger woman revealed that her name was Diamond — thus clueing us in to the fact that she was the “threat” that Jim had arranged to send his estranged missus. 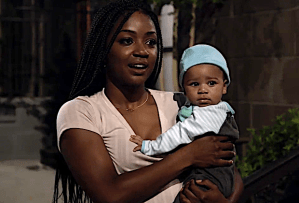 ‘I AM TAKING YOUR ASS TO REHAB, OR I AM DRAGGING IT TO JAIL — YOUR CHOICE’ | As the episode rounded the bend and headed for the finish line, Hanna returned home to find a young woman named Tanisha on her doorstep with a baby in tow. She was looking for — uh-oh — Benny. “It’s just really important that I talk to him,” she said, being as enigmatic as humanly possible. When Hanna rang her son for Tanisha, he didn’t remember who she was. Apparently, they had met some time ago at a club. “Lord have mercy,” said Hanna, connecting the dots. “Is this his baby?” Yep, said Tanisha. It had only been one night, but hello, that was all it took. When Benny balked, insisting that Tanisha was barking up the wrong family tree, Hanna intervened. “I don’t even know who she is,” Benny swore. “Well, your penis did, boy!” So he was to get his ass over there stat. 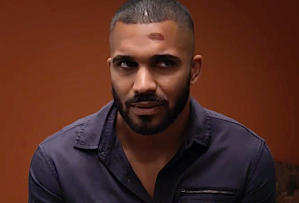 Meanwhile, Jim arrived at David’s and expressed his astonishment — and pride — at the fact that his idiot son had managed to break out of the hospital. As Wyatt argued like an overgrown toddler that he wouldn’t go to rehab, he lost consciousness — and a pulse. And it would’ve been plenty exciting to think that the d-bag might finally kick the bucket as Madison administered CPR, but let’s be real: Wyatt has more lives than a litter of cats! Finally, back at the motel, after Candace lectured her brother about his surprise baby — “I told you to wrap it up!” — Benny got a call from outside: Sandy. But upon looking out the window, Benny came to a horrifying realization: Sandy wasn’t outside the motel, he was outside Hanna’s! Just then, Sandy and his goons opened fire with Hanna, Tanisha and that poor baby inside! Can Hanna catch a break freaking ever?!? So, what did you think of the episode? Candace’s haunting? Benny’s surprise? And what about that shooting?!? Tyler Perry wouldn’t kill off Hanna, would he? Hit the comments.