The moment Teena Marie’s “Deja Vu (I’ve Been Here Before)” played during Adult David and Marissa’s verbal dust-up on David Makes Man, viewers should’ve known there was something behind all of that, um, tension.

The answer arrived a few scenes later in Tuesday’s episode when Shella heard noises in the laundry room and cautiously opened the door only to find the former middle school classmates getting it on atop what she called “the good dryer.” Ooh wee! Not David and Marissa? Even Gloria was shocked to get that hot tea.

Sadly, it feels like the pair is doomed before they even begin. For starters, David already kind of has a girlfriend, and he and Marissa are on opposite sides of the Ville renovation. David is working with developers to turn the Ville — the public housing project he grew up in — into mixed-income condos. But Marissa is an environmentalist who warns that tearing down the Ville would displace the impoverished and contaminate the ground water.

David and Marissa have long had a complicated relationship that dates back to when they were preteens vying for Dr. Woods-Trap’s hard-won approval. Back then, they’d argue and bicker about the plural form of octopus. Later, when they ran into one another as high school students, Marissa questioned David’s loyalty to Seren, the best friend he no longer mentioned in conversations. 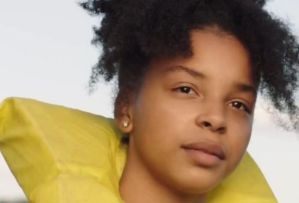 Annoyed by the accusation, David almost let it slip that he is the one who helped Seren run away from his abusive childhood home… but stopped himself just in time. With any luck, hopefully Marissa will get David talking again so we can finally learn Seren’s fate.

Elsewhere in Episode 4, Shella showed audiences her boss moves. Just like her grandmother Mrs. Hertrude, Shella collects the rent and works as the property manager for the Ville. She also is an esthetician and has a kinky OnlyFans page. By episode’s end, she was vowing to block David’s efforts to redevelop the Ville.

However, it is Shella’s complicated relationship with JG that could cause the most friction in her life. JG stopped by her place after dropping off groceries for a seemingly dementia-riddled Mx. Elijah to “thank” Shella for saving his life again. There was flirting from both sides, but the moment Shella questioned whether or not JG’s shooter should go to prison for life, he snapped at her and left in a huff. Gloria’s sons sure love to argue with strong-willed women.

What did you think of David and Marissa’s hookup, and do you think JG will choose Shella? Drop your thoughts in a comment below.