Arlen Escarpeta never takes for granted that his David Makes Man character JG was slated for an early death.

Ultimately, series creator Tarrell Alvin McCraney changed his mind about killing off JG in Season 2 because he felt like the title character had suffered enough trauma in the inaugural season.

“That’s why young JG was a ghost originally,” Escarpeta divulges to TVLine. “Tarrell talks about this. Killing JG really would’ve wrecked David’s world one hundred times over. That’s his younger brother, but also his son, in a sense, because David raised JG. Now, in a completely different storyline, he’s losing JG because JG is his own person.” 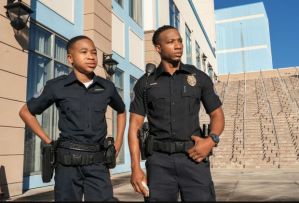 In Season 2 (airing Tuesdays at 9/8c on OWN), viewers will see how David (played by Kwame Patterson) and his brother’s dynamic continues to play out, now that the elder revealed he didn’t visit the younger in the hospital because he was afraid JG would die. JG, a Miami police officer, nearly perished when he accidentally got shot breaking up a fight. Instead of unpacking that fear, JG asked David if he could have his slice of hospital homecoming cake.

“JG and David definitely need to figure out what their love language is as brothers,” says Escarpeta, who initially auditioned to play Sky. “It’s part of their journey. They share a special bond, and they have a special love for each other. But they haven’t figured out how to love each other.

“JG knows how to love David by getting on David’s nerves, and David knows how to love JG by trying to be JG’s dad,” he adds. “Now that JG has this independent streak and is doing his own thing, there’s a little bit of separation where they don’t know exactly how to navigate that conversation that needs to be had. It’s part of both of their evolutions, and you will see it come to a head sooner than soon.” 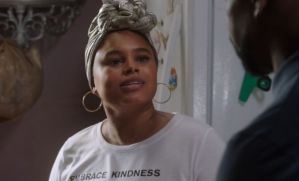 JG could also tear apart his home life if he leaves his common-law wife Trisha (Brandi Huzzie) for his childhood friend Shella (Zsane Jhe) — or attempts to be with both women at the same time. Viewers will get a taste of that in tonight’s Episode 4.

“Love is complicated,” Escarpeta says. “You don’t know what you want until you want it, and you have to be mature enough to understand what love is and how love really plays itself out, especially when you bring children into the world.”

But “JG has to figure this out,” the Secret Circle and Whitney vet concludes. “He’s a father and a husband, and all of that could be unraveled. Shella is a person who draws him in, and he can take his mask off with her a little more. But does that mean she’s his person? We shall see what JG and the ladies figure out.”