Like the scrappy soccer team it follows, Apple TV+’s Ted Lasso is a bit of an underdog. After all, it was based on a series of NBC Sports commercials, which isn’t the most promising start, and it debuted to little fanfare last summer on a new streaming service that hadn’t found its breakout hit yet.

But underdogs can surprise you: Overwhelmingly positive word-of-mouth turned Ted Lasso into an unlikely sensation, and it became one of last year’s most acclaimed series. (Suddenly, at every party, you’d hear someone saying, “Have you seen Ted Lasso? I loooove Ted Lasso!”) That’s a lot to live up to in Season 2 — which premieres Friday, July 23 on the streamer — but having seen the first three episodes, I’m happy to report that the new season is just as good as you’re hoping… though it has a more melancholy tone than you might be expecting. 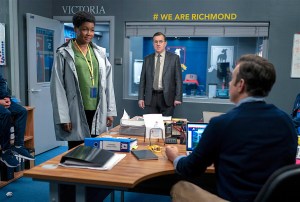 Season 2 picks up after last season’s heartbreak, with Ted (Jason Sudeikis) and his ragtag team AFC Richmond being relegated to a lesser soccer league, where they frustratingly keep getting ties in match after match. The premiere does get off to a bumpy start with a clunky plot point that’s out of character for a normally grounded series, but it leads to the introduction of Season 2’s big addition: sports psychologist Dr. Sharon Fieldstone, played by Sarah Niles (I May Destroy You). She’s brought in to help get the players’ heads on straight, and she quickly lets Ted know she’s not a fan of juvenile horseplay… or cookies. The players love her, but she’s seemingly immune to Ted’s charms — and her arrival triggers a fresh wave of anxiety in the old ball coach.

In fact, she has plenty of psychological issues to sort through here. Season 2 has a mournful, uneasy feel to it overall; it’s almost like an emotional hangover after last season’s sugar high. Nearly every character has hit a rough patch of some sort: Former rivals Roy Kent (Brett Goldstein) and Jamie Tartt (Phil Dunster) are both humbled by various setbacks and are in the process of building their way back up to their former glory. Even the relentlessly upbeat Ted is haunted by demons that he hasn’t fully processed yet. If Season 1 was all about Ted winning everyone over with the power of positivity, Season 2 is more like, “OK… so now what?” 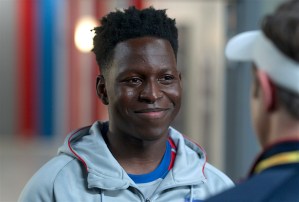 But don’t worry: The plucky, can-do spirit that made last season so special still endures. It’s tough to pick a favorite performance from this deep roster of supporting players — they’re all so good! — but Hannah Waddingham has an especially strong start in Season 2, as Rebecca embarks on a terrifying new chapter in her life. Plus, Toheeb Jimoh’s Sam takes a big step forward, and Episode 3 puts him in the spotlight with an intriguing dramatic turn that deals with the ethical pitfalls of corporate sponsorship. Meanwhile, Ted is still the king of random pop-culture references (“Make like Dunst and Union, and bring it on!” he tells a reporter), and Sudeikis’ goofy, folksy appeal continues to set the tone and tie the whole series together.

What is it about Ted Lasso that made us all fall so hard for it, though? Maybe it just hit us at the perfect time: Debuting during a pandemic when all of us felt disconnected and stressed out, this show is warm, and cozy, and life-affirming. It reassures us that people are essentially kind… even the people who seem the least kind at first. Like Friday Night Lights, the sports setting is almost beside the point. At its core, Ted Lasso is a human story — and a nice reminder that, through victory and defeat (and even ties), we’re all on the same team.

THE TVLINE BOTTOM LINE: Season 2 of Ted Lasso nimbly avoids the sophomore slump with a pivotal new addition and a more introspective tone.