Remember when Run the World‘s Ola showed up at Whitney’s door right after she decided that she’d finally tell him she cheated?

Well, the Starz series’ season finale picks up immediately after that, with Whitney wasting no time in telling her fiancé she slept with someone else. Their emotional conversation is spread throughout the half-hour episode as Ola tries to come to terms with what she’s done.

Meanwhile, Sondi, Renee, Ella and Whitney’s maid of honor Hope navigate a disastrous night out on the town for what was supposed to be Whitney’s bachelorette party. Though the woman of the hour was noticeably absent, the rest of the ladies found fun things to do, like bond over wine and weed-infused treats.

Ella even finds time to patch things up with Anderson, realizing he’s only looking out for her and is very much worth hanging onto. 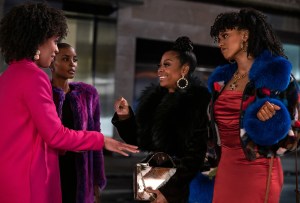 Plus, Ola and Whitney’s fight manifests into sex and things seem to be headed back on track. That is, until Ola tells her he needs time to think. A heartbroken Whitney finally arrives at her bachelorette party to seek comfort from her girlfriends.

The episode ends with Ella sneaking away to the bathroom to start writing the first chapter of her new book — a huge move for the writer who’d been struggling all season to bounce back from her ill-received second book.

According to Andrea Bordeaux, who plays Ella, her character’s sudden inspiration is an amalgamation of everything she experienced this season: the humbling reality of her book not living up to expectations, having to take a job she doesn’t like, realizing she can still make a cultural impact even if it’s not her dream job and having Anderson remind her that she is a great writer.

“It’s a buildup of all these little lessons and experiences to remind her that ‘I’ve done all of this before and I can do it again, and now I have a much better understanding of who I am,’” Bordeaux tells TVLine. “It’s going to come from a much more grounded and centered place.” 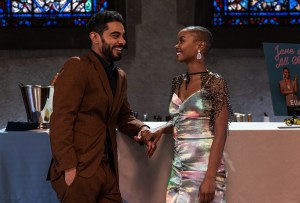 Bordeaux, who found that final scene in the tub “so beautiful,” says she looks forward to seeing what’s ahead for Ella in a potential second season. (The show has not yet been renewed.)

“I’m excited to see how she explores life from a place of feeling like, ‘Okay, now my confidence is coming back and I’m in my creative space again,'” she shares.

When it comes to Ella’s relationship with Anderson, Bordeaux is hopeful that their second shot will go much better now that she’s learning from this experience and finding her groove again as a writer.

“Ella is at a place where she’s building her confidence back up and she’s recognizing the true gifts that she has as a creative,” Bordeaux explains. “Having that recognized by your partner is so essential to the connection. It’ll be interesting to see how Ella explores just surrendering to the trust of their union because there might still be trepidation about the fact that she had her heartbroken. But the fact that she’s choosing to dive back into reuniting with him, I think says a lot about the growth that she’s experienced.”

What did you all think of Run the World’s season finale? Grade the episode, as well as the season, below and let us know your thoughts in the comments.