From the beginning, Sam (played by Keir Gilchrist) has been obsessed with penguins and their really cool eyelids. He always dreamed of venturing out to Antarctica, where it’s cold and isolated, to hang with the black-and-white endothermic birds. The final episode featured a full circle moment in which Sam steps outside and we see Antarctica in the background, confirming that he fulfilled his childhood dream.

Because it was such a fitting ending — it was originally pitched as a Season 2 ender — the memorable moment was held for the series finale.

“We saved it, so we knew all along that that was going to be the ending,” creator and showrunner Robia Rashid tells TVLine. “We didn’t plan on having Doug (Michael Rapaport) going with him, but that ends up feeling really full circle in terms of where Doug and Sam started out.” 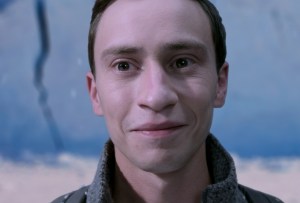 As you’ll recall, Sam and Doug began the series feeling very disconnected from each other. Doug was overprotective and didn’t really understand his son, who just wanted to have more independence. “They started out feeling not very connected and like they had nothing in common,” Rashid adds, noting that the trip marks serious growth in their relationship. “You don’t feel like they’re going [to Antarctica] together out of any sort of fear. [Doug]’s not going to watch out for Sam. He’s going because he wants to hang out with his kid, and he’s curious.”

Rashid says she found that moment, in which we see Sam smiling in Antarctica, to be “really powerful.” As she observes, “It’s so cool to see somebody on the spectrum doing this massive thing and it’s so ambitious, not just for someone on the spectrum, but anyone. To be that ambitious at that age and to really believe in yourself like that, it’s very moving to see.”

But not all moments in the finale were happy ones. In a bittersweet scene at the Olive Garden, Sam and Paige (Jenna Boyd) break up. As difficult as it was to split this perfectly matched pair, Rashid says it makes sense in the end.

“There are things in the show where I break my brain trying to figure it out, and then there are some things that just feel like that’s what needs to happen. And from the beginning, I felt like [their break up is] what needed to happen,” she explains. “Sam started out feeling like he could never find a girlfriend. He just never thought that he’d find love, and now he’s in this place where he so believes that he can find love, he’s willing to let it go because it feels like the right thing. That is so badass and powerful, and so amazing.”

Paige, meanwhile, “started out in this confident place but then got beaten down at college,” Rashid notes. “This is a scary decision and she’s not making it out of fear. It’s the right thing for her… She’s going to be there for a year, and who knows what’s going to happen in Antarctica?” 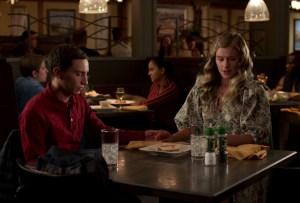 If you found yourself reaching for the Kleenex after that crushing scene, you’re not the only one. The Atypical boss reveals that the cast and crew also found the breakup to be difficult, and were sobbing while filming. “I’ve never seen Kier crying in a scene, and he was really crying in that scene,” she shares.

Casey (Brigette Lundy-Paine) also underwent a transformative journey in the final season, exploring her identity in an unexpected way. The final episodes saw her cope with anxiety, realize she’s bisexual and overcome the fear and humiliation of public failure after choking during a huge track meet with a UCLA scout present.

“She comes across as so strong and such a source of consistency and strength for her family and her friends. In this season, she falls apart and it’s too much, and that is so relatable,” Rashid explains.  “The relationship with Izzie (Fivel Stewart) ends up being a place that she feels really safe, and I think she needed to kind of go through that, to know.”

Casey had always expressed a strong desire to just get away from her family, so when she finally gets the opportunity to attend a school that’s far from home, it’s surprising to see her decide to stay local instead. Knowing that her anxiety played a role in that choice, Casey’s mom Elsa (Jennifer Jason Leigh) convinces the teen track star to reassess her goals and hopes for the future. Casey ends the series in a much better place and with a world of options ahead of her.

“If and when she does decide to go away, it’s going to be in a more adult way. It’s her going from this childlike kind of rebellious thing to this really thoughtful, ‘What do I want my life to be?’ kind of place,” Rashid says. 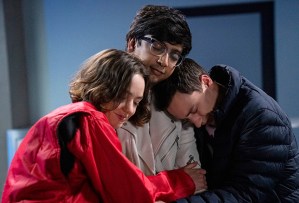 In typical Atypical fashion, the series tackles difficult subjects with well-balanced humor. Season 4 found self-proclaimed ladies’ man Zahid (Nik Dodani) forced to reckon with his idea of masculinity after learning he has testicular cancer and must have one of his testicles removed. According to Rashid, the writers viewed the story as their “takedown of toxic masculinity.” After all, Zahid took pride in being a “playa” with his cheesy one-liners and penchant for objectifying women.

Throughout his cancer ordeal, Zahid makes both good and bad decisions. He rekindles things with his ex-girlfriend Gretchen (bad), breaks up with her (good) and forms a genuine friendship with a woman named Honey (very good) — all contributing factors to his change for the better. “I personally think that Honey is his soul mate, and he gets to a place of did he change because he lost his testicle? I don’t know, but he did do some real thinking,” Rashid adds.

With the series officially wrapped, Atypical’s creator is proud of what she’s accomplished over four seasons, including the show’s light-hearted approach to everyday life.

“I think there is a lot of power in comedy to amplify voices and stories. Our show, even when it’s dealing with the most intense issues, is at its soul a comedy. There’s a genuinely hopeful message at the center of this and I feel proud of that. I don’t need it to be dark and upsetting,” Rashid concludes. “I think it ends in this lovely, kind place and I feel like I need that after the year we just had. I’m proud of the work we did.”