Bless Zoey’s heart. In the Season 4 premiere of Freeform’s grown-ish, she really thought that her friends would be happy for the blissful love she and Aaron now share.

And it’s not like the new couple’s pals weren’t supportive in Thursday night’s opener. It’s just that each person had his or her own individual issues to overcome. Which meant even though they too wanted to turn up during the group’s festive vacation in Mexico before the start of senior year, memories from the past got in the way.

Take for instance that awkward game of “Most Likely To…” the group played. It seemed innocent enough. But the tequila that helped them relax also made everyone incredibly candid. That’s why Jazz took a swipe at Zoey on the cheating question. Zoey thought Jazz was ribbing her about Aaron and Rochelle’s break-up, which happened when Aaron cheated on his ex-girlfriend with Zoey — and then chose Zoey over Rochelle — in the Season 3 finale.

However, Jazz was actually talking about the time Zoey cheated on a final and got expelled. Just mentioning the word “cheat” made Vivek bring up Jazz’s dalliance with a fellow track runner when she was on “a break” from her relationship with Doug ,and the tension only thickened. Nomi poked fun at Ana and she poked back — but more viciously — and soon no one was in a good mood. 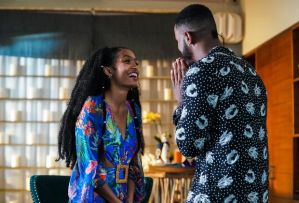 Did we also mention that Luca and Aaron came for one another, and Ana and Aaron rumbled too? Yeah, it wasn’t pretty, and Zoey had had it. Tired of trying to make her friends have a good time, get along and put the past behind them, she stormed off — and Aaron chased after her. When he caught up with his new boo, Aaron reminded Zoey that after all these years of almost being together, they’d never had an actual first date.

That’s when Aaron and Zoey hit the town, downed much more tequila and ended up running off to a little Mexican chapel to get married. (Dre is going to kill this girl!) Zoey also stole a pinata in a drunken haze, and the pair decided to consummate their vows on the beach. So when the cops arrested them afterward, it was unclear if they were getting thrown in the Clink for public indecency… or shoplifting. We will find out the answer in next week’s Episode 2, of course.

Elsewhere in Mexico, Ana and Javi had a big fight because he was afraid he’d contacted chlamydia from a past sexual partner but he didn’t and he didn’t bother to tell Ana either. She instead found out by hacking his iPad. Yikes!

On the one hand, you could argue, “What is there to discuss if he doesn’t have the STD and therefore didn’t transmit it to her?” But Javi probably should have told Ana anyway, and she shouldn’t have hacked his tablet. So much drama for comedy, amirite?

What did you think of the Season 4 premiere of grown-ish and was all this calamity worth the wait? Grade the opener in our poll and drop your thoughts in a comment below.