Spotted in this article: spoilers from the series premiere of HBO Max’s Gossip Girl reboot, as well as from the original CW series’ finale. Proceed with caution.

Part of the fun of The CW’s Gossip Girl (2007–2012) was theorizing about the face behind the titular tattler, regardless of how you feel about that polarizing reveal in the series finale. But HBO Max’s reboot, which dropped its first episode on Thursday, isn’t interested in playing that game again.

“I felt like it had been done already, and the reason to do a show again is to find something new to look at,” showrunner Joshua Safran tells TVLine. The first time around, when we didn’t know that Dan was Gossip Girl, he would do terrible things like send in a post while sitting next to his sister while she was having waffles, knowing that she would be destroyed once she looked at her phone and that he would be the one who destroyed her. That was a full avenue that we never drove down, so it felt like this was the time to look at that — all the things we never got to see Dan do when he was Gossip Girl.” 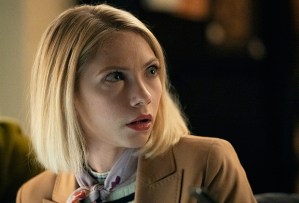 This time around, it’s a group of teachers at Constance Billard — led by Kate Keller (Tavi Gevinson) — that revives Gossip Girl by way of an as-yet-unverified Instagram account. Though Kristen Bell still voices the digital pot-stirrer, the reboot gives us a behind-the-scenes look at how each game-changing post is acquired, vetted and posted.

“What we’re exploring is that no one can successfully play God,” Safran says. “The question is: How long do you think you can? And what does that actually do to you? The closer Kate gets to Zoya and some of the other kids, the harder her job will become. There are a number of difficult decisions that she is going to have to make.”

“The joke has always been that even on the original show, not everybody lived on the Upper East Side,” Safran says. “[Gossip Girl] now also says scandalous lies, not lives. There are little subtle changes in all of it to reflect our world. She’s not just showing you rich people, she’s exposing rich people’s lies. The first time around, Dan was the poorest kid and he lived in Dumbo, and now the richest character lives in Dumbo. I wanted to reflect what New York is today. People live everywhere. No 20-year-old in their right mind wants to live on the Upper East Side.”

Teens have also changed since the original Gossip Girl ended in 2012, Safran notes, calling them “more aware now” in the age of social media. “They know the world they’re in. They know that wherever they go, it’ll be talked about. You also can’t write a story without thinking about the characters’ relationships with their phones. The phone choreography, the idea of all of us being attached to our phones, is a whole new thing. We also allow these kids to have a little more fun. The kids had a lot of stress and drama the first time around. There were dark clouds hanging over all of them. No one was breezy. At the start of this show, they appear to be happier before Gossip Girl comes in, and then it’s a slow descent into madness for everybody.”

How do you feel about the Gossip Girl reboot’s identity twist? The first episode in general? Cast your vote in the poll below, then drop a comment with your full review below.