The relationship your parents had can positively or negatively impact your romances as an adult. This is what Netflix’s new soapy Korean drama You Are My Spring posits as it follows a delightfully  expressive woman named Kang Da Jeong who finds herself falling for two men.

There’s Joo Young Do, a hyper-observant psychiatrist, and Chae Jun, a smooth-talking investment banker who may or may not be a sociopathic murderer.

Thankfully, the homicidal aspect of the narrative emerges late in the series premiere, which strongly establishes both Da Jeong’s traumatic childhood growing up with an abusive and alcoholic father and her penchant for toxic entanglements with men as a result. It only makes sense then that she would fall for Jun, who keeps popping up and giving her real and paper flowers to win her affections. She even tells her mother about the sweet words Jun showers her with on their first date but leaves out the part about his stalker vibes. 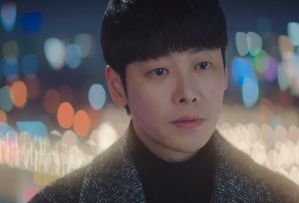 Around the same time, something in Da Jeong keeps drawing her to Young Do despite the fact that their initial interaction is at best awkward and at worst invasive because Young Do decides to psychoanalyze her. The analysis is a little too accurate for Da Jeong’s liking, and she finds herself aggressively but comically grabbing him by the lapel to make him stop.

The interactions between the two grow increasingly wacky as water from her flat on the fourth floor leaks through the ceiling of his office on the third. Da Jeong also runs into Young Do’s ex-wife, a famous and obnoxious actress named Ahn Ga Young, who loves insulting her former mother in-law and publicly embarrassing her former husband. Adding a little more coincidence and chance to the mix, the two got married at the very hotel where Da Jeong is a concierge.

There is also a running theme with tangerines. While the fruit’s symbolism is slightly different in America, in Korean culture the little orange fruit is often given as a gesture of love. Tangerines also tie together a number of elements and relationships in Da Jeong’s life. It’s the fruit that Da Jeong’s mom Mun Mi-ran can’t afford in flashbacks, for instance, when she struggled to feed her family due to the financial toll of her husband’s alcoholism. 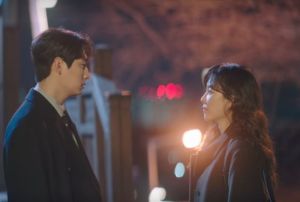 It’s also tangerines that Jun talks about eating together in a happily-ever-after scenario he says he envisions with Da Jeong. Lastly, Ga Young gives Young Do a tangerine tree when he moves into his new office and he re-gifts the tree to Da Jeong.

While giving her the tree, Young Do pleads with Da Jeong to not date Jun, thereby breaking her toxic relationship pattern … and she says she won’t see him. But by episode’s end, after two confrontations between Jun and Young Do, Da Jeong can be seen waiting in the wings for Jun. Talk about a love triangle.

What is unclear is whether or not Jun, who does have some sociopathic tendencies, is a killer or not. Is Young Do right about him, or is he biased against him because Jun is his romantic rival? Or could both be true?