Gary’s wedding surprise has played out for three weeks on Tyler Perry’s Sistas. But on Wednesday night’s installment, Andi told her groom-to-be she’d rather wait because the vibe wasn’t right, and Gary actually listened.

Of course, there had to be drama first, and that meant that Danni, Sabrina and Fatima ran to tell Gary that Andi didn’t want to get married this way. Gary accused the trio of talking Andi out of getting married, but the three women assured him that the choice was Andi’s alone. After some back-and-forth in which Gary tried to convince Andi’s best friends that he is a good guy, Gary decided to go and talk to Andi directly.

That’s when Andi said although she loved Gary, she didn’t want a surprise wedding and she needed more time to plan her big day, work out any logistical hiccups and meet his son. Remember him? Gary said he loved Andi too and that he would wait until the time was right.

While Andi and Gary planned their future wedding, Danni, Sabrina and Fatima questioned Aaron about his feelings for their girl Karen. Aaron said he really likes Karen but that she seems to still have strong feelings for Zac. This comment from Aaron proved to be a sore spot for Fatima, who started dating Zac after he and Karen broke up. She also reiterated that she didn’t know that Karen used to date Zac. 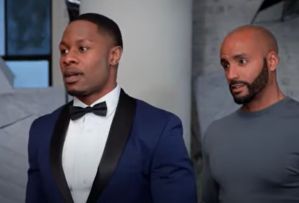 Gary and Andi then walked out and assured their friends that they will get married someday. When they got home, an amorous Andi changed into a sexy red bra-and-panty set with a matching robe and said she wanted to show Gary a new “sex trick.” But before she could explain that she learned the maneuver from a magazine, Gary said he was jealous and worried that another man had taught her the move.

Andi defended and explained herself, but the mood had passed, and both Andi and Gary settled in for the night — that is, until Gary decided to explain himself further. This excited and pleased Andi, who tried once again to get something going sexually, but Gary said he just couldn’t move beyond his possessiveness. He added that he was still angrily envisioning Andi with her previous boyfriend and even asked if that man had been in what is now their bed. He apologized to Andi and she said it was OK, but you could tell it wasn’t OK.

Boy did Andi dodge a bullet in not marrying Gary, who seemed to be intentionally creating confusion and drama because Andi hadn’t married him. It wasn’t like this was the first time they’d been intimate, so for Gary to all of sudden start grilling Andi about her past sexual encounters felt manipulative and forced, like he was punishing her.

As for the other ladies, they dealt with their own life dramas. Danni freaked out when Preston the Cowboy started talking about getting married in the future, and Sabrina had to calm her down. Zac broke up with Karen for good this time and sealed the deal by lustily making love to a very willing Fatima.

Sabrina stopped by Karen’s place to inform her that Andi didn’t marry Gary after all, but she also questioned whether or not Karen’s voice of reason came from an envious place. Karen said no and kicked Sabrina out, and Aaron dropped by to check on Karen. Maybe Karen should give Aaron a try and finally leave Zac alone?

What did you think of Andi’s choice not to marry Gary on Tyler Perry’s Sistas, and do you believe Gary got his revenge by picking a fight and denying her sex? Drop your thoughts in a comment below.