Need to catch up? Read our most recent Loki recap here.

Stop me if you’ve heard this one before: Four human Lokis and an alligator walk into a void at the end of eternity…

No? I’ll keep going, then. Loki‘s penultimate episode picks up right where last week’s hour left off, with Loki meeting four new variants of himself: Kid Loki, Classic Loki, Boastful Loki and Alligator Loki. (Not Crocodile Loki, as I had mistakenly said last week. I’ve been thoroughly humbled by my lack of reptile snout knowledge. Also, here’s what Alligator Loki looks like in real life. Incredible.)

Loki comes to learn that this post-apocalyptic hellscape is called The Void, where everyone and everything from a pruned timeline branch is sent — and a giant smoke monster in the sky, Alioth, destroys everything that comes into The Void, ensuring it never escapes. At this point in their journey, the four Loki variants are merely trying to avoid death by Alioth, rather than attempt a return to the TVA like Loki wants to try. But hey, at least The Void has plenty of Marvel Easter eggs for viewers at home! My personal favorite is Throg, or Frog Thor, trying futilely to reach Mjölnir while trapped in a glass jar, but Thanos Copter is a close second.

The variants take Loki to an underground bunker that serves as their home base, and they commiserate about the events that led to the TVA hunting them. Classic Loki suggests they’re all destined to be the God of Outcasts, no matter the timeline, and Loki counters that Sylvie is different: She wants to take down the TVA, not take it over, and Loki plans to kill Alioth in order to help Sylvie fulfill her quest. Naturally, the four variants — Gator Loki included! — mock his plan, and Loki leaves the bunker to venture out on his own… only to find a dozen more variants of himself waiting at the bunker door when it opens. (Only one of them is played by Tom Hiddleston, though, which is disappointing. Paul Bettany got a whole Vision-on-Vision fight scene, cowards!) 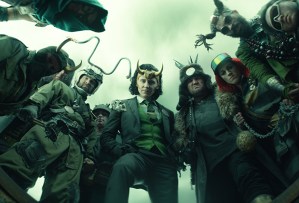 Anyway, an all-out brawl breaks out among the variants regarding which one of them should rule The Void, but Loki, Classic Loki, Kid Loki and Gator Loki manage to escape the fight after Classic Loki casts a projection of all four of them in the bunker. Once they’re back outside, the variants agree to help Loki take down Alioth, but they’ll only lead him to the monster; actually approaching it “is a death sentence,” Classic Loki warns.

Meanwhile, back at the TVA, Renslayer buys herself some time by telling Sylvie about The Void’s existence, explaining that she’s helping Sylvie because she, too, now wants answers about how the TVA was created. But when some TVA hunters bust in, looking to permanently take Sylvie back into the bureau’s custody, Sylvie decides to prune herself with Renslayer’s time stick — and she swipes Renslayer’s TemPad, too! — sending her to The Void solo. (Later, a locked-up B-15 tells Renslayer that she’ll never get answers about the TVA’s creation before Sylvie does. “You only want it,” B-15 tells her colleague. “She needs it.”)

Upon landing in The Void, and immediately getting chased by Alioth, Sylvie is saved by someone driving a pizza delivery car — and the driver is Mobius! Yes! I cheered from my couch! But after she’s been rescued, Sylvie theorizes that Loki has already been killed by Alioth… and she believes the way out of The Void is to go back toward “the angry cloud.”

Once they’ve returned to where Alioth lurks, Sylvie and Mobius reunite with Loki and meet the other variants, and Sylvie mocks Loki’s plan to try killing Alioth. Instead, Sylvie suggests that whomever’s controlling the end of time (and whomever created the TVA) is likely located beyond Alioth, and Alioth is merely the guard dog preventing people from reaching the real ruler. Rather than kill Alioth, Sylvie plans to enchant it and gain access to whatever lies past it. 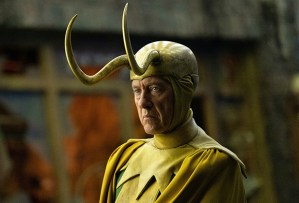 Later, while Loki and Sylvie wait for Alioth to approach again, they share a sweet conversation about what they’ll do with their lives when this is all over. Neither one is sure, and Loki suggests, “Maybe we could figure it out together.” “Maybe,” Sylvie responds. Loki also promises he won’t betray her at the last minute, and they get cozy underneath a blanket Loki conjured for them. But when it comes to addressing the nexus event they caused on Lamentis — and Mobius’ theory about their interest in each other — Loki and Sylvie awkwardly deny any chemistry, suggesting that Mobius’ words are “just another TVA lie.” Whatever, they love each other and we all know it.

Finally, Alioth makes its return. Loki says he’ll stay with Sylvie while she tries to enchant it, while Classic Loki, Kid Loki and Gator Loki opt to stay behind in The Void, which has become their home. Mobius takes the TemPad that Sylvie swiped from Renslayer and opens a time door back to the TVA, which he plans to burn to the ground. “Thanks for the spark,” Mobius tells Loki and Sylvie, and Loki gives him a long hug before he leaves.

When it comes time to face down Alioth, Loki offers himself up as bait in an attempt to distract the smoke monster, which would give Sylvie a chance to enchant it from the other side. But Alioth turns its face back toward Sylvie before she can get in its head, and it rushes back toward her… when suddenly, Alioth is distracted by a ton of glowing green light nearby. It’s not Sylvie producing it, though: It’s Classic Loki, who is using his formidable magic to project the entire city of Asgard. Ornate buildings and roads pop up right there in The Void, and Alioth is sufficiently distracted as it tries to destroy everything the variant has just created.

Eventually, Classic Loki’s power weakens, and his projections fade, leaving Alioth to fly right toward him. “Glorious purpose!” Classic Loki shouts, and he cackles with delight as Alioth tears through him, leaving only the variant’s Horned Helmet behind. (Sob!) But the distraction has given Sylvie and Loki enough time to try jointly enchanting Alioth, and just as the beast turns its head toward them once more, they make the connection, and all of the smoke rushing at them suddenly turns green.

“Open your eyes,” Sylvie tells Loki, and he does to find that Alioth’s face has vanished, and the green smoke in front of them parts to reveal a massive castle in the distance. Hand in hand, Loki and Sylvie exchange a look, then begin walking toward it.

OK, your turn! What did you think of Loki‘s penultimate hour? And what do you think awaits Sylvie and Loki in that castle? Tell us below!