There was a lot to unpack in Tuesday’s installment of David Makes Man, but one theme kept emerging — men need to embrace their emotions more.

Nowhere was this more obvious than when JG got out of the hospital and asked David about the unspoken tension between their mother Gloria and his wife Trisha. At first, David tried to deflect the question by saying his younger brother should ask Gloria what happened. When that didn’t work, David admitted that he had a hard time seeing JG connected to all those breathing and feeding tubes and fighting for his life after being shot.

Shocked that his brother was scared he might die, JG asked if David realized that he would pull through after surgery. But David just stared in silence as if to let him know that he really didn’t think JG would live. Instead of either men dealing with their fears and talking about those feelings of sadness and horror, they let the silence swell along with the tears in their eyes before JG interrupted the quiet by asking if David was going to eat his slice of welcome home cake.

David said no and gave JG his cake. And that was that. A moment where an emotional breakthrough could’ve taken place evaporated like a puddle in the hot summer sun; the two men then sat in silence until it was time for David to leave. Come on, brothers. Talk it out. Sigh.

Later, when David met with his therapist, he thanked her and said he no longer needed her help because, with JG out of the hospital, he was sleeping better. Work was also improving. The therapist wasn’t fooled. She brought up her concern with David’s visions and said David had obviously suffered trauma of some sort and his visions were a coping mechanism because he thought JG was going to die. 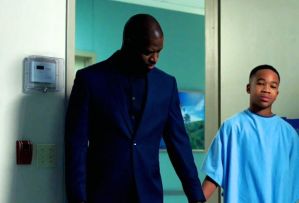 While he grappled with that thought, all of David’s visions reappeared from a young JG to Seren. However, the most damning was the return of Sky, who roared back to the forefront of David’s psyche smirking and smoking a cigarette. What does this all mean and will David ever find peace of mind?

Elsewhere in the episode, Trisha temporarily lost the respect and compassion of JG and their daughter Trenise when she flipped out after one of Gloria’s foster kids accidentally bumped JG during their welcome home performance. Trisha, who called the kid a gay slur and apologized, also struggled with JG’s less than faithful past when Shella came to visit him in the hospital.

Shella also stopped by Gloria’s house to see JG and proved that Trisha was right to be concerned. Blame it on nearly dying or the fact that JG is grateful that Shella called 9-1-1 when he got shot, but something is going on between JG and Shella … and it’s far from harmless.

What scene made you teary during this week’s David Makes Man? And do you think David and JG will ever speak truthfully? Drop your thoughts below!