Atypical’s final season, which arrives this Friday on Netflix, is all about new beginnings.

The charming dramedy follows Sam (played by Keir Gilchrist), a young man on the autism spectrum who searches for love and independence. Over the years, he has found greater autonomy and an awesome girlfriend in Paige (Jenna Boyd), while also picking up important life lessons along the way.

Season 4 will push Sam even further as the soon-to-be college grad contemplates the next stage of his life. The final episodes will see him set his sights on an ambitious goal, which will lead him down some unexpected avenues. And while we can’t reveal the exact nature of that objective, series creator and showrunner Robia Rashid tells TVLine that it will mark significant growth for the character.

“Sam gets to a place where he realizes that he’s not just scraping by. Now that he’s gotten this far, what’s the next step?” Rashid teases. “What he decides is such a giant step, it feels like it might never happen, but he works at it.” 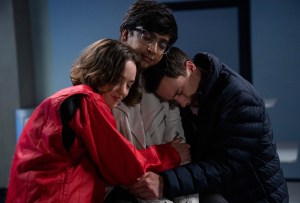 Like Sam, Paige will also be contemplating personal growth. She starts the final season from a place of fear, but is poised to walk out of the series with a different mindset.

Of Paige and Sam, Rashid says they’re both “coming from this place of fear and what we get to is this idea of going from a scarcity mentality to a plenty mentality. There are opportunities out there, and there is lots of love out there, and it’s OK to take big risks.”

For Rashid, saying goodbye to these characters after four years was difficult as well as a bigger challenge than she expected, since Season 4 was written and filmed during the pandemic. And while Rashid could write them for “10 more years,” she’s content with how it all ends.

“I did feel like we got to a good place with everybody. I felt like everybody’s ending was satisfying,” she adds.

Looking back on that final outing, many of the show’s themes and where it ends was “what we needed at the time,” Rashid concludes. “We needed messages of hope and journeys of adventure, and that’s kind of what Season 4 is.”