Sunday’s Run the World finds major truths revealed, and several characters recognizing that they deserve better than what they’ve been given.

Sondi, who’s raised concerns over Amari’s predominately white ballet class negatively impacting her self worth, takes the young girl to see Black ballet dancers perform. Amari is delighted to see dancers who look like her and asks to wear the flesh-toned ballet shoes Sondi customized for her. See? Representation matters.

In a not-so-quiet conversation during the performance, Matthew suggests Sondi consider asking Baptiste — the same woman who threw nuclear levels of shade at their housewarming party — to be her new advisor. But not before revealing that there were rumors of him sleeping with a student. According to Matthew, the unnamed woman was “flirtatious” and people made assumptions that weren’t true. Sure. 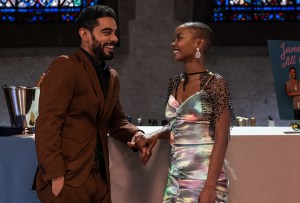 Cut to the awkward meeting with Baptiste, in which Sondi apologizes for coming off rude at the party, also noting that her insinuations about Matthew are harmful. Baptiste gets right to the chase: Sondi needs a new advisor or she’ll be booted from the current program. She points out that Sondi hasn’t yet found her own voice since she’s been so focused on Matthew’s worth. She agrees to consider the offer if Sondi writes a 15-page “thought starter” with a new angle for her dissertation.

Sondi is stressed and trying to write but keeps getting interrupted by Maya, who wants to play. Agreeing to make a quick trip to the store, she finds Matthew reading in a coffee shop alone. Irritated, she calls him out for leaving his daughter with her while he went out for “me time” knowing she has so much work to do in three days. Plus, he’s not even picking up after himself around the house. She’s overworked and underappreciated and needs time alone. Hence, a trip to the library.

Meanwhile, Ella attends an exclusive dinner with a celebrity. It’s a fun night with live music and easy conversation until she catches said celebrity cheating on his wife — and Ella’s friend — in the bathroom. Ella is put in the tough position of writing up this juicy story about her homegirl — who invited her to the small gathering — and getting that all important traffic boost. The story also prompts an argument with Anderson, who doesn’t really care about it and calls her job “whack.” To be fair, Ella feels the same way about the gig. However, she’s not happy with her boyfriend for not supporting her. 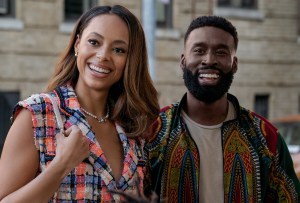 Renee meets with her college friend Mia, who is now a VP at Loreal Cosmetics, for drinks and some career tips. Renee’s informal pitch for the brand impresses Mia, who’s interested in setting up a meeting for a formal pitch. Despite Renee’s efforts in bringing in the Loreal pitch, she’s delegated to a supporting role under her much younger white male colleague. Quoting Maya Angelou like she did in the pilot, Renee quits. She was not going to stay and be continually disrespected like that.

While out with Renee, Ella runs into Iman, who’s angry about the story and vows to drag her name through the mud.

Elsewhere, Whitney and her fiancé Ola take another session with their marriage counselor, who raises concerns over their demanding schedules. Ola points out that Whitney has been distant lately, which she blames on her busy job and overwhelming wedding plans. But let’s be real: She’s also feeling guilty for that one-night stand she still hasn’t told him about. She finally confesses to Sondi, who encourages her to come clean to Ola.

As Whitney prepares for her bachelorette party, she hears a knock at the door. It’s Ola. Boy, do they have a lot to talk about.