It’s no coincidence that Run the World takes a joyful and optimistic approach to love and friendship in Harlem.

Creator Leigh Davenport set out to create a series that reflected the happiness and fulfilling relationships that Black women experience in real life, despite what other shows tell you. Even when they’re dealing with things like being passed over for a promotion or wedding jitters, Ella, Renee, Sondi and Whitney are still living their best lives because they have each other.

The series draws fair comparisons to Sex and the City — Ella even refers to her on-again, off-again boyfriend Anderson (Nick Sagar) as her Big — but feels much more realistic. Take Ella, a journalist-turned-writer who takes a job at a gossip rag to pay her bills after her book flops on the charts. Over the course of the season, we see how that failure has rattled her confidence as she tries to build herself back up. 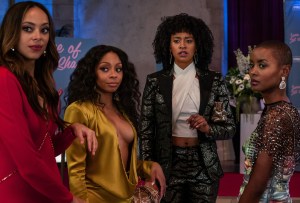 “She feels a little bit disillusioned [and] fearful,” Bordeaux explains. “In Episode 6, she talks about how she used to feel invincible, and she doesn’t know how to get that feeling of invincibility back. It’s a journey of redefining yourself and recalibrating your path.”

Things didn’t work out for Ella the way that she’d expected, Bordeaux notes, so now she’s “just trying to figure things out” and “decide: What is my life supposed to look like now? How do I move forward, despite being in this place of a lack of confidence and a little bit of fear?”

Ella’s self-evaluating journey includes seeing her therapist Nancy (Rosie O’Donnell) to work through those issues. In Episode 6, we learned that Ella and her friends are all seeing Nancy, which sparked a debate amongst fans about whether this was strange or normal. According to Bordeaux, the funny coincidence was inspired by a real-life experience.

“Leigh and a number of her friends realized that they were all seeing the same person,” Bordeaux shares. “I don’t find it unusual at all. I think it’s really funny. I’ve read a few comments from people who say that it’s unrealistic, and it’s like, ‘Well, just because you haven’t experienced something doesn’t mean it’s unrealistic.'”

She adds that “as women find these avenues for healing, it makes a lot of sense to actually share those resources with the people around them.”