Andi got a taste of both this week on Tyler Perry’s Sistas when she decided to go through with Gary’s surprise wedding plans because she thought it was a sweet idea. While Danni and Sabrina didn’t agree with her choice, they stuck by her side in a show of unconditional support. But Karen refused to co-sign on Andi’s blind romanticism and reminded her bestie that she hasn’t even met Gary’s son yet. Plus, as she pointed out, Gary is just a shady dude in general.

Andi’s only defense in response was that Jasmine, his ex-wife, was to blame for most of their relationship trouble, and Gary is innocent. Frustrated with Andi’s choice, Karen ditched the bridesmaid’s dress, changed back into her regular clothes and headed to her car, but Fatima was right behind her. She followed Karen to try and convince her to change her mind and support Andi’s wedding bliss. Karen refused. Of course, this led to the two women arguing over Karen’s on-again, off-again boo Zac, who seems to have feelings for both women. 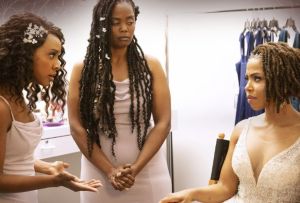 Karen questioned whether or not Fatima knew Zac was her ex-boyfriend, and Fatima said she didn’t and Karen headed to her salon to clear her head. However, when Karen got there, one of her stylists was using the back room of the salon for a booty call, and a horrified Karen asked the woman and her gentleman caller to call it quits. The stylist reminded Karen that she, too, has used the salon for, um, intimate purposes, but Karen said she can do that because it’s her salon.

Elsewhere in Atlanta, Maurice made the most of his night by harassing Calvin and his date Peggy at a local gay bar, and he played detective, looking for the guy who stole Calvin’s checks. Ever the multitasker, Maurice accomplished both and even knocked out the criminal with one punch. Looks like Jacobi taught Maurice some of his fight moves.

Zac had dinner with Preston, aka the Cowboy, who was way too kind and allowed him to crash the steak dinner he’d planned for Danni. Preston also acted as Zac’s sounding board and even advised him on that investment scheme Zac is considering.

Back at the photo shoot site/wedding spot, Gary and Aaron compared notes on their romances, and Aaron revealed that he has budding feelings for Karen. But the biggest surprise of the night was yet to come.

While Sabrina, Danni and Fatima helped Andi get ready and even offered her different types of marijuana to help her relax, Andi shut down and got super quiet before dropping a bombshell — she doesn’t want to marry Gary!

What did you think of Andi’s decision, and should she walk or run away from Gary? Share your thoughts in a comment below.