Warning: The following contains spoilers for The Bold Type‘s series finale. Back away from the fashion closet if you haven’t watched yet!

The ladies of The Bold Type are moving on up — and away.

Wednesday’s series finale found Jane realizing that she’s meant to be a writer, while Jacqueline came to the conclusion that the future of Scarlet is actually… Kat! With Kat now taking the editor-in-chief reins, Jane was inspired by a photo of her mom to leave the magazine and travel the world, having the adventures that her mom wasn’t able to.

On the relationship front, Kat and Adena finally got back together (for good!), and Richard realized that he wants Sutton more than he wants children, paving the way for their reconciliation. As for Jane, she hooked up with the hot bodyguard and bumped into her ex Ryan! But will she actually ring up her former writer Scott, now that she’s leaving Scarlet? Below, showrunner Wendy Straker Hauser answers that burning question and plenty more about the series ender. 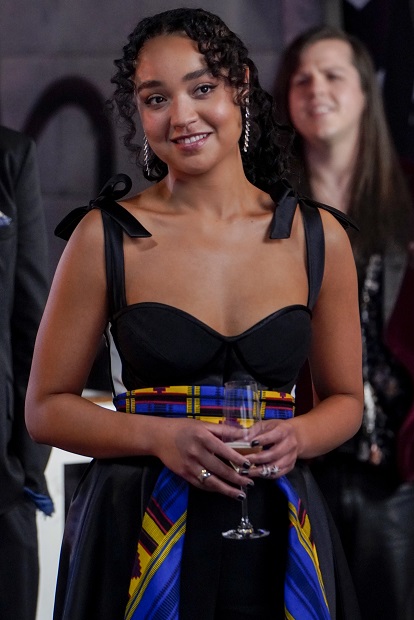 TVLINE | When did you know that Kat was going to be editor-in-chief of Scarlet? Has that always been part of your vision for her?
It was not always part of the vision. It really came up when we found out we were having the fifth and final season, and we knew it was a shortened season, and we really wanted to get Kat back at Scarlet with the girls, and it just sort of came out of that. Then as we started to think about all the girls’ storylines and Jane’s storyline and the fact that she’s wanted this her entire life, and what would it look like if you step into something, and it’s actually not right for you? We started to realize, well, you know who it is really right for, and what would feel perfect and organic and just really fulfilling is if Kat took that position. As we started to think about that more, we remembered in the pilot how she was really the most confident and comfortable [one], and the one always talking to the board and the one always changing policy. The more we started to play with the idea, the more right it felt for the entire writers’ room.

TVLINE | Off-screen, did Jane recommend Kat for the job, or is that something that Jane and Jacqueline came to together?
We felt like it was something that they actually had both been thinking in their own hearts and minds, and we tried to, in a nuanced way, layer that in. Because we really wanted to make sure that it didn’t feel like Jane was saying no to the job and then recommending Kat, but that at the same time that Jane was realizing it wasn’t potentially right for her, Jacqueline was realizing how right it was for Kat. So we really tried to make that happen at the same time, and we felt like the way that Jacqueline reacts when she hears Don’t Turn Away, and having Kat in the office and seeing her passion, and being reminded through Jane about how much Kat had helped Jane with her pitch deck and all that stuff just layered in how right Kat has always been and how much of a manager and a leader Kat is in that way, which is really a big, big part of Jacqueline’s job. 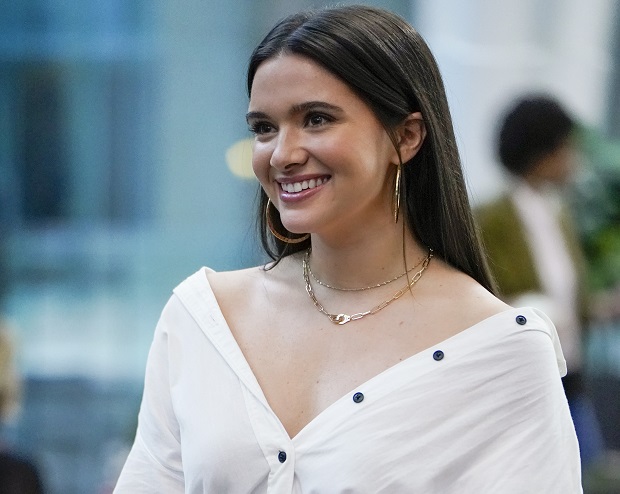 TVLINE | Meanwhile, Jane has decided to leave Scarlet to travel. Where do you see the future taking her?
In a lot of ways, she’s the most unknown, but also the most exciting. It feels like she has this huge journey for herself, in part because she always was so set on where she was going in her life that there was a little bit less leeway that she allowed herself to explore. Now she’s realizing that that exploration for her needs to start now. So I think she’s going travel the world. I think she’s always gonna be a writer. I think she couldn’t breathe without writing. And I’m oddly just as excited to think about where she’s going and not know where she’s going as I think our fans will be. Part of the fun is just in the unknown for Jane, who always knew everything. But I think she’s going to have a big, awesome, amazing journey. She may not settle down back in New York for a long, long time.

TVLINE | Jane also got a surprise visit from her ex-boyfriend Ryan. Why did you want to bring him back one more time before the end?
I’ve always been a Pinstripe/Jane fan, and I think a lot of people are. We don’t get any second chances now. This is the end of the series. There was something really fun and full-circle and satisfying about seeing the two of them see each other and be at a good place, and seeing Jane not crumble when she sees him, but be at a place where she loves him and respects him, but is also happy and confident and all those things in her own right. There’s a part of me that very much feels like for Ryan, Jane Sloan is The One That Got Away. I think he knows that he lost the love of his life, and I think he was just too young and immature when he met the love of his life. I know stories like that that have actually wound up resulting in really successful marriages and lots of kids with that love of their life, because they were able to come back and profess their love. But for right now, it just felt satisfying to see those two together — they did have a very real relationship — and just to watch them be both equally in a good place but still love each other.

TVLINE | What was your approach, then, to Jane’s love life? You have her clicking with the bodyguard, but then also earlier this season, Scott basically told her, “If things ever change, call me up.” Now that she’s left Scarlet, is she going to call Scott?
I don’t think she’s going to call Scott for a while… She needs an adventure. She needs something away from Scarlet. She needs to explore. I see her leaving the country, traveling abroad, and I do see her taking The Failing Feminist internationally. I just think she’s going to have her own version of an Eat Pray Love journey that, obviously, is grounded in her fear and her passion. She’s going to have fun, and she’s going to explore, professionally and emotionally. I wish I could be on that journey with her, because it feels like she’s going to learn a lot and have a lot of fun and live very much in the moment. 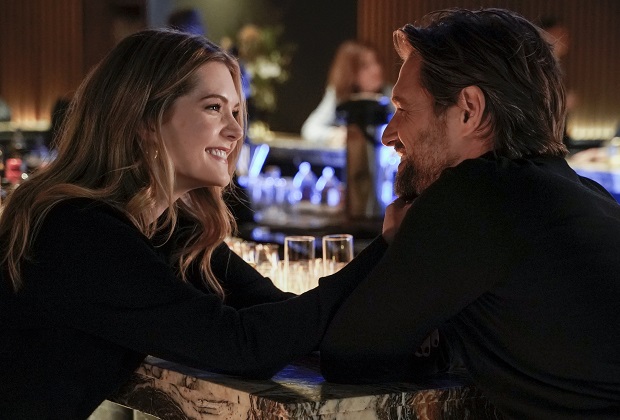 TVLINE | Things really could have gone either way with Sutton and Richard. How did you come to decide that they would overcome the issues that they had about children and would get back together?
We just went to the depths of our hearts and core for this couple on this one, because we had a bunch of different endings. Ultimately, this one was the one that felt right, and I’m so, so glad we did it, because I think I would have regretted had it ended any other way and [would have] wanted desperately to go back in time to do it over again. We just grappled so much with [the idea that] these two have a very real conflict and and a very serious view of what the rest of their lives look like, and what do you do when those views are different? We didn’t want Sutton to change her mind, and at the same time, we didn’t want Sutton to lose the love of her life because she didn’t want to have children. And we really believe that Richard is still madly in love with Sutton, and the reality of not living with her was much, much more painful than the reality of not having a child. And so he very confidently and firmly told her which life he wanted to live, and we love that for both of them.

TVLINE | You mentioned that there were some different endings. Can you share any details about what those alternate scenarios looked like?
We played with the idea that it would be a very similar storyline to the one that you saw, but that Richard would profess his love, and Sutton would say, “I know you. You’re going to be an amazing father, and I love you so much, and I don’t want you to regret this. Go have the family you’re supposed to have,” and have it be this heartbreaking ending, but also inspiring because they were both in the places that they were potentially meant to be. But ultimately, it just didn’t feel right. It just didn’t feel like that was the ending for both of them. We really found this journey for Sutton where she often didn’t feel like she was enough, and it felt like this amazing, satisfying ending to have Richard say, “You’re more than enough.” And so that became the winner for all of us. 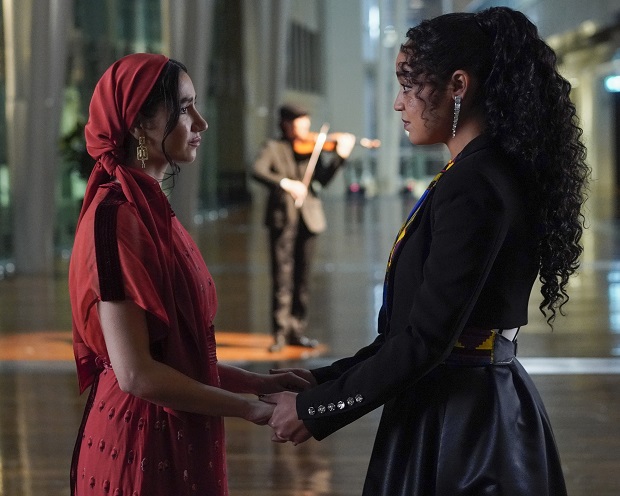 TVLINE | Kat and Adena also reunited in the finale. Why was it important for you that they end the series together?
I think they were always meant to be together. Kat met Adena at a time when she didn’t even know who she was, really, and had yet to explore her sexuality, and she was just in the beginning of her journey. At that point, it felt like it would have been too early for them to last forever. Watching Kat through the last five seasons, she does have a fear of commitment, and she does have a fear of being labeled, and she did have a lot of crossroads to overcome. But we felt that they belong together, and we feel like Kat is now in a place where she can profess her love to Adena, and it can be forever, because she’s no longer afraid.

TVLINE | Was there anything that you really wanted to do or any characters you wanted to bring back, but you couldn’t because of the shortened episode count or because of COVID restraints?
We would have loved to have just had more time to tell these stories, more time to slow things down and to dig deeper and maybe to go into a little bit more depth with Sutton’s journey after we left her in a messy place at the end of Season 4. More time would have given us more opportunities to dig deeper and slow down, but ultimately, we would have gotten to the same place.

TVLINE | The last scene is of the three girls in the fashion closet as Jacqueline is looking on. What made that the perfect moment for you to end the show on?
The minute that we hit Episode 6 and we started brainstorming and breaking the episode, we knew we wanted to have nods to the pilot. The scream was one of those opportunities, and the fashion closet just felt like another. As we were playing with the idea of the changing of the guards and Kat taking over and Jacqueline stepping away, it felt like a really nice moment to just mirror the pilot and to remind the audience that at the end of the day, this show is about these three women. No matter what, against all odds, no matter what titles they have or where they’re traveling, that it’s always going to be about the three of them. So that just felt like a really nice way to symbolically illustrate that.

The Bold Type fans, what did you think of the show’s swan song? Grade it below, then hit the comments!