Insults flew like punches in Tuesday’s eventful episode of The Haves and the Have Nots. Not only was Veronica in horrifically rare form, even for her, the she-devil and Jim’s assassins came up with a “killer” idea, Hanna went full-on Hanna on Broderick and his playmates, and Uncle Vinny gave the all clear for a hit to be carried out. On whom? Keep reading…

‘I’M NOT TRYING TO SEE ALL THIS’ | As the hour began, Jim laughed off Veronica and Celine’s court order and suggested that he could get the D.A. to believe that his former lover had murdered Amanda. Disgusted, Celine called him Satan himself, to which he responded, “No, that would be this beautiful bitch standing right by your side.” (Hilariously, Veronica took it as a compliment.) Despite Jim’s threat, the malevolent lawyer reminded him that he had 24 hours to pony up $50k or join his wife behind bars. Speaking of Katheryn, when Hanna did as she asked and stopped by Wyatt’s, she found Broderick in bed with two women. After giving the strumpets a taste of the Hanna treatment and having them skedaddle, she could barely keep from chortling as Katheryn’s gold-digging lover begged her not to tattle on him. He even tried flirting his way out of trouble. Hanna’s perfect reaction: “Boy, bye.” (Where Wyatt was while all this was going on, I have no earthly idea. As far as I could tell, he never left the chair in which he sat when he came home last week!) 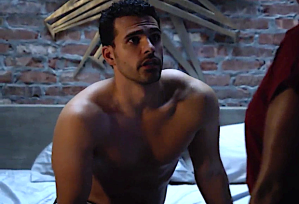 Later, when Katheryn called from prison, Hanna broke it to her that Broderick was being about as faithful as I’ve ever been to a diet. “Put him out,” barked Katheryn. “Go there with the sheriff and have him put out right now.” Never mind that the day was well and truly over — now. (Whatever Hanna’s getting paid, it ain’t enough!) Just for good measure, Katheryn had Hanna put Broderick on a three-way call to let him squirm. “My sister was here!” he insisted. Hanna was lying! Oh, he was ready to do or say anything to keep that swanky roof over his head. “Do they accept conjugal visits?” Forget it, Katheryn said. She wanted him outta there. Before the call was ended, Wyatt, more drugs in his system than on the shelves of a pharmacy, had to pipe up in the background and give himself away. Now Katheryn really wanted Hanna to go over there right now! 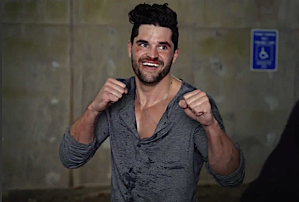 ‘LOVE THOSE SHOES, MISS HONEY’ | Picking up where last week’s episode left off, Marco had Akil drive them to a parking lot, where the latter knocked the gun out of the former’s hand, setting off what would’ve been a fight to the death had they not been so evenly matched. After discovering during a break from the fisticuffs that they’d both been in their country’s Navy, Akil floated a brilliant idea. Why didn’t Marco just tell Veronica he’d killed him and collect his payday? Then Akil could kill Veronica like Jim wanted and collect his own payday. Deal, said Marco, who suddenly trusted his adversary enough to collect the guns they’d dropped. Back at the motel, Benny received a call from Rianna informing him that he could move into his new house the following day. She also thanked him. “No one’s ever stood up like that for me before,” she said. But she was way too vulnerable and lonely for him to come over — words that he, of course, took as an invitation. 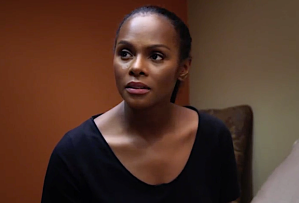 Shortly, Conley came knocking at the motel to plead Charles’ case to Candace. The president-elect was just a scared kid, insisted Conley. He needed a shark like Candace whispering in his ear. Hoping to sway the ex-hooker, Conley shared that Charles’ wife “didn’t die of natural causes. She hung herself while she was at work. The kids found her.” Yikes. As you can imagine, Conley left Candace with more to think about than the mess that Benny had stirred up with the Malones. While all that was going on, Veronica paid a visit to a gay club as far as I could tell mainly to spread homophobia like it was cheap perfume. “I gotta give it to these loose-hipped queens,” she told the owner, William. “They sure can dance.” But why was she there? What did she need to tell William, with whom she’d been involved ages ago? We never found out. Instead of say what she’d come to, she swigged vodka from the bottle and engaged in a dance-off with a drag queen that she so enraged, she was lucky she didn’t get her second beatdown of the season!

‘SO YOU’RE THE NEW MAMA ROSE’ | Back at Wyatt’s, Broderick advised the druggie to take it easy. “Do you know you’re doing downers and uppers at the same time?!?” Wyatt did not know. Nor did he care. “Go clean the kitchen,” he told his mom’s former booty call. When Wyatt suggested that they rob his parents’ house for more coke money, Broderick decided to leave. Not leave-leave, though, he was just going for a walk. But he gave Wyatt his keys, anyway. (What? How the hell was he going to get back in?) Finally, at the Iron Bone, Vinny revealed to Mitch that he was the new Mama Rose. Which at first mainly seemed to involve asking if Mitch was eating real Italian food. But then Vinny got to the point: Mitch had told Jim that the Malones were protecting the Youngs. Big no-no, that. Jim and David had bailed out the Malones many times while they were on the bench. Hell, “they made evidence disappear. Now I have to punish you.” Did that mean that Vinny wouldn’t protect Candace and Benny? That was exactly what it meant. That, and Mitch was headed to the basement to have the stuffing beaten out of him.

As the episode drew to a close, Sandy came to see Vinny with an icepack on his head like a cartoon character with a boo-boo. Vinny didn’t believe for a second that Benny had gotten the worst of the fight. But if Sandy wanted revenge, he was welcome to take it. He had his uncle’s blessing — and his gun — to kill Benny. “Or are you scared?” Vinny asked as Sandy all but obviously shook in his shoes. Nah, Sandy insisted. He could do it — and he would, darn it. Don’t come back, Vinny said, until Benny is dead. So, what do you think, Haves and Have Nots fans? Is Benny a goner (especially after what happens in the scenes from next week)? Will Akil be the one to finally do in Veronica? Theories in the comments.