Original Batwoman cast member Dougray Scott will not be returning for Season 3 of the Arrowverse series, where he plays incarcerated Crows commander Jacob Kane.

With the Crows now out of commission and Kate Kane (played by Krypton‘s Wallis Day) bidding Gotham City adieu (after checking in on her pop, which she said  she would do), “this character of Jacob had sort of run its course, for better or for worse,” showrunner Caroline Dries explained to EW.com. “We ended up being able to really write to a good ending for Jacob, just kind of knowing in advance that’s what we were going to do…. It allowed us to give Dougray some really rich stuff toward the end.”

“Having Dougray Scott as Jacob Kane on Batwoman was incredibly special for all of us,” Dries also said, in a statement. “An actor with his pedigree and reputation elevates any project, and he had great chemistry with his castmates. We loved telling Commander Kane’s story for the last two seasons, and we will always leave the door open to have him return. We wish him the very best!” 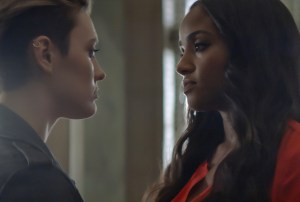 Dries also confirmed that, as alluded to above, the recently “resurrected” Kate Kane, played in Season 1 by Ruby Rose and recast with Wallis Day, is indeed leaving Gotham and the show. “I would never say never because you never know, but for now, that was our farewell to Kate,” she told EW.

Batwoman Season 3 premieres Oct. 13 at 9/8c, now airing on Wednesdays (and again leading out of Legends of Tomorrow).