Warning: This post contains spoilers for Sex/Life Season 1. Read at your own risk.

Billie (played by Sarah Shahi) may have just blown up her relationship again on Sex/Life.

After reconciling with her husband Cooper (Mike Vogel) and deciding that the suburban life they’ve built together was enough, she realized at the last minute that it wasn’t and ran straight to her music producer ex-boyfriend Brad (Adam Demos). In those final moments, Billie made it clear she won’t be leaving her husband but wants to pick up where they left off 10 years ago.

“It was always intended to be a shocking realization for Billy,” showrunner Stacy Rukeyser tells TVLine. “She loves both her children, but she’s in this world with other parents who seem to be fulfilled with just this world, and it’s not enough for her. There is this other part of her, this more sexual self, this wild or free part of herself that she wants to experience.”

“It was such a big part of the show to say, ‘Yes, all parts of women should be celebrated and acknowledged and tended to by their partners.’ It’s a release, in a way, when she runs through New York, and there are a mix of emotions,” Rukeyser explains. 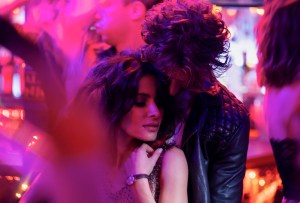 Brad’s smile at the end suggests he’s not completely put off by Billie’s declaration. But given that the episode ends before he can say anything, however, it’s still unclear how exactly he feels about it.

“I don’t know what Brad is going to say to her. He really put his heart out there on the driveway and proposed a happily-ever-after to her, and that is not what she’s proposing to him,” Rukeyser adds. “I’m not sure if Brad will say yes to that or not. But that’s what we’re hoping to get a chance to explore in Season 2.” (The series has not been renewed yet by Netflix.)

Although we don’t know how Brad feels, it’s clear that Cooper is not happy at all with his wife returning to her ex. He is last seen angrily staring at his phone, which logged his wife back in Manhattan where Brad currently lives.

Vogel, who plays Cooper, notes that Billie’s change of heart “puts them behind a lot of obstacles.”

“It’s such a complex situation,” Shahi adds. “I just hope that if we do get to Season 2, we can continue down the rabbit hole because it sure is messy to play. It’s fun to play, and I think it’s just incredibly real.”

What did you all think of that surprise ending? Grade Sex/Life’s finale below, and let us know your thoughts in the comments.