Mythic Quest Season 2 tested Poppy and Ian’s friendship, but the pair still make quite a team.

And when the Apple TV+ workplace comedy’s sophomore season came to a close on Friday, fans saw the two creative directors set aside their egos — for the most part — for the greater good. First, they let David know they were going to finally complete the new game expansion and unite Hera and Zeus. There was just one problem: Ian had to concede that Anthony had been right all along and Hera was in fact too big for Mythic Quest’s servers.

A little crestfallen, Poppy accepted the fate of her game and attempted to move on. But Ian had other plans. After walking down memory lane together (it was quite literally a hallway full of designs and props from past games/projects), Ian and Poppy realized that Raven’s Banquet was their greatest creation together at MQ and it was time to move on.

They both tendered their resignations, much to David’s horror, and decided to strike out on their own to truly bring Hera to life. There was an odd moment that made it seem like Poppy wanted more than friendship with Ian — what was that goofy grin about? — but Ian shut that down and the installment ended with Poppy sketching out her ideas on a cocktail napkin while Ian smiled and sipped his margarita.

What Poppy and Ian’s new game and lives will look like in Season 3, if there is one, remains to be seen. Can the show still be called Mythic Quest if Ian and Poppy don’t work there anymore? Will there be a subhead to address the harrowing Hera adventure that will undoubtedly ensue for the two? Will they hook up? Whatever happens will definitely be fun and funny. 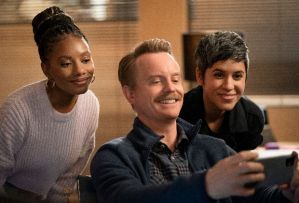 Elsewhere in the Season 2 closer:

Dana and Rachel also quit because they both thought they were getting into UC Berkeley, though only the latter made the cut. But Poppy and Ian took mercy on Dana, and because they admired her gumption and determination on the Grouchy Goat game, they helped her get into a local computer engineering program. The two even turned Dana into a contractor just in case she comes up with something brilliant or actually turns her Goat game into something great.

Brad dimed on himself to the SEC for insider trading and Jo, who was the real culprit, helped make it look like the agents were taking him away in cuffs for “the street cred.” In reality, the two agents just wanted to question Brad. That said, if Brad is tried and found guilty, he will likely have to serve a six-month sentence in federal prison, an outcome that would surprise no one. And with Brad out of the picture, Jo returned to David to be his assistant again. At least they have each other.

What did you think of the Season 2 finale of Mythic Quest and what do you imagine Season 3 could look like? Give the finale a grade in our poll and drop a comment below.