Trebek’s adult children, Matt and Emily, accepted the award on his behalf, during the CBS telecast. 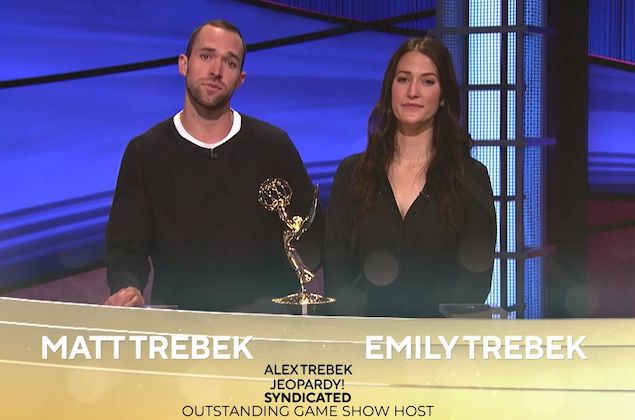 “We are so honored to accept this award on behalf of our dad,” Matt said. “For as long as we can remember, he was always so proud to be a part of Jeopardy, to work on a show that was based on knowledge, risk, and that challenged people how to think. He loved every bit of it.”

Emily added, “Over the past 37 years, the show became a second family. He was always excited to go to work, even during his battle with cancer. He was so fortunate that he was able to do what he loved, and we know he not once took it for granted. On behalf of our family, we thank you so much.”

Trebek passed away last November of pancreatic cancer at the age of 80. He had hosted Jeopardy! since the daily syndicated version debuted in 1984; his final episodes aired in January. Since then, the quiz show has rotated in a number of guest hosts, including Jeopardy! champ Ken Jennings, NFL quarterback Aaron Rodgers, CNN anchor Anderson Cooper and actress Mayim Bialik. A permanent replacement for Trebek, though, has not yet been named.