Conan O’Brien‘s talk show brethren congratulated him on a job well done on Thursday, as his late-night television tenure came to an end. 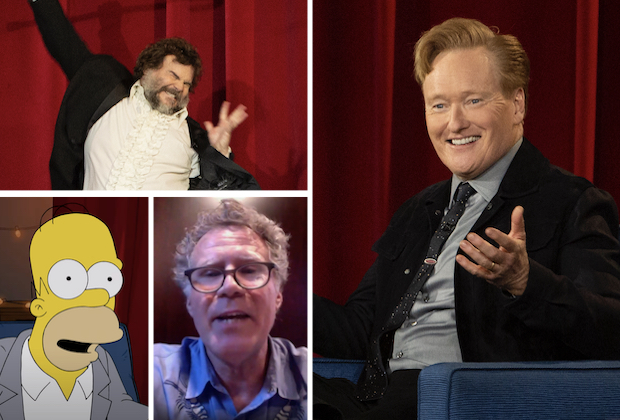 Kimmel also alluded to the Tonight Show kerfuffle of 2010: “We look forward to whatever you have planned next at HBO Max — and also, I want to say congratulations to Jay Leno on his new time slot at TBS.”

CBS’ Stephen Colbert, meanwhile, marked the day’s “bittersweet milestone in the legacy of late night” with a lengthy desk segment.

“Conan has had an amazing tenure,” he said. “It started back in 1993, when he began hosting Late Night at the tender age of nine. Following a rocky puberty, he moved on to The Tonight Show, then spent 11 years at Conan on TBS… Tonight is his last show, but like a kid who keeps saying he’s running away, he’ll be back before you know it with a new weekly show on HBO Max — which I assume is short for HBO Max Weinberg.

“Conan is a dear friend and a lovely fella who has been nothing but a strength and a great source of advice for me as I took over a late-night show, and I want to congratulate him on 24 incredible years… and several perfectly fine ones as well,” he continued. “I hope he makes the most of his six days of retirement before starting at HBO.”

Colbert then welcomed Conan-turned-Late Show scribe Brian Stack out on stage to bid a fond and oh-so-scandalous farewell to his former boss:

NBC’s Seth Meyers also paid his respects, from one Late Night host to another:

“Earlier tonight over on TBS, Conan O’Brien had the final episode of his talk show,” he said. “We are huge fans of Conan. Conan was the first person that showed Late Night was something that could continue with different guests after he did it post-David Letterman. We are huge beneficiaries of him. We wish him the best of luck, Andy the best of luck, everybody over on their crew the best of luck, and we want to thank him for everything he’s done over the years as one of the greatest talk show hosts you could ever hope to see.”

Current Tonight Show host Jimmy Fallon, who inherited Late Night from O’Brien in 2009, was the last to weigh in on Friday.

“Congratulations @TeamCoco,” he wrote on Twitter. “One of the funniest brains in comedy. Without you, I wouldn’t have a job. Thank you for everything.”

Tonight, two men I respect tremendously close a chapter of their brilliant careers. Conan made doing his job the hard way look easy. He & Andy are among the funniest of the many funny people I’ve met. Congratulations to you & your co-workers on a remarkable achievement.

Conan, thank you for 28 wonderful years of late night shows. Now, can I claim the title of “palest host?” pic.twitter.com/GIeJfdqroc

Congratulations to our friend and brother in TBS time slots, @ConanOBrien, on his show finale. Can’t you see the resemblance?? pic.twitter.com/wwRZnONrRS