Legacies closed out its third season on Thursday with a pair of unlikely team-ups, the start of a new relationship, and an abrupt ending that probably had a lot of viewers wondering, “Wait, was that really the finale?”

The season’s final hour began with Landon helping Cleo swipe a sculpture from her ex-boyfriend’s art exhibit — that ex, of course, being Leonardo da Vinci. (Real talk: I know that this show revels in its own absurdity, but Cleo’s genuine relationship with da Vinci somehow feels like its most ridiculous twist of all. Like, that fight between Krampus and Santa Claus doesn’t even register in comparison.)

Anyway, Cleo melted her work of art down into a fine goo, which she combined with a stolen vial of Hope’s blood to complete her Malivore entrapment spell… only it didn’t work for some reason. After a bit of bonding — you know, swapping stories about their days as Malivore’s prisoner, yadda yadda yadda — Cleo was convinced that she could trust Landon, infusing him with the inspiration he needed to take down dear old daddy.

Elsewhere, Hope ditched Josie and Lizzie after they made it clear that they were never going to team up with Clarke. The way Hope saw it, joining forces with Landon’s brother was her only shot at defeating Malivore, aside from going full tribrid — and as we all know, that’s a hard Plan B. Hope was surprised to discover that Clarke had become human, and she was even more surprised by how adamant he was that she and Landon are still “destined” to end up together. Frankly, I never pegged Clarke for a ‘shipper, much less a “Lope” fan.

Hope and Clarke’s search for the Malivore portal led them straight to Cleo and Landon’s hotel room. And because this is The CW, she arrived just in time to see them staring into each other’s eyes — context be damned. Things went from bad to “oh, s–t!” when it was revealed that “Landon” was actually Malivore, which Hope didn’t figure out until after he absorbed Cleo and put Clarke in the hospital.

Clarke reminded Hope that despite feeling like she’ll be facing Malivore alone, she still has her friends and family in her corner. And that’s exactly who was standing by Hope’s side when she confronted Malivore in the episode’s final moments. “We want our friends back,” Hope told him, to which he replied, “There’s something I want, too. Fate’s a bitch, isn’t it?”

The… end? Sadly, yes. As showrunner Brett Matthews explained in a tweet earlier today, this episode is the “unintentional” season finale. Additional episodes were filmed — in fact, Thursday marked the show’s final day of production before going on hiatus — but they will be held for Season 4 this fall. 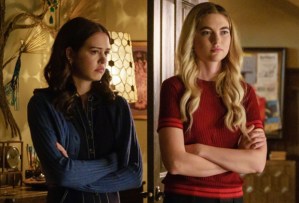 * Lizzie inexplicably decided that it was her and Josie’s “sacred duty” to find a rebound guy for Hope, lest she once again try to get back with Landon. And Lizzie saw no need to be picky. To quote her, “anyone who won’t dissolve into a puddle of goo when they have sex will do.” Enter Ethan, who just so happened to bump into the Saltzman sisters while they were hashing out the probability of fixing Hope’s fractured love life.

Unfortunately, Hope wasn’t the girl Ethan had his eye on. “I’m kind of into someone else,” he told Lizzie after a night of tossing the ol’ pig skin around on the wickery field. “Whoever she is, she doesn’t hold a candle to Hope Mikaelson,” she replied — a sentence I never thought I’d hear her say. Like, ever. And much to the surprise of absolutely no one, Ethan’s real crush ended up being Lizzie. 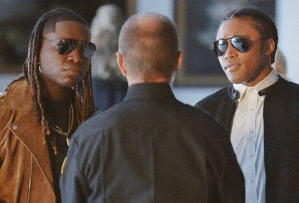 * MG and Kaleb took a brief detour on their hunt for Cleo and Landon in order to help the victims of a nasty car wreck. Legacies is really leaning into the idea of these vampires moonlighting as full-blown superheroes, which I do enjoy, but my heart also breaks for poor Kaleb. If he hadn’t stopped to save those people, he might have made it to Cleo in time to keep her from getting nom-nom-nom’d by Malivore.

* In happier couple news, Josie and Finch had a very mature conversation towards the end of the finale. Finch explained that coming from a family who hid her true nature makes her especially sensitive to secrets. So Josie came clean about everything — and I mean everything — that has happened to Ethan because of their magic. No wonder Josie spent the entire hour worrying about Ethan getting hurt again. He’s always getting hurt!

Your thoughts on this somewhat sudden finale? Grade the episode and the season below, then drop a comment with your full review.