The closer Clarice gets to the truth, the closer she gets to danger, and if ViCAP’s hunch is right, that danger is knocking at her front door… literally!

With lawyer Joe Hudlin now dead in a staged suicide, could Alastor Pharmaceuticals’ CEO Nils Hagen actually get away with it all? Here’s what we know at the top of Thursday’s finale: Hagen hired a contract killer to assassinate three women who experienced devastating side effects after they participated in a clinical trial for a migraine drug. They were going to come forward and speak out until their lives were tragically cut short. But as we now know, there’s way more to the story, and no one can be trusted. Here’s what happened in the Silence of the Lambs sequel’s season ender.

ViCAP thinks Tyson is trafficking women for his father, and as we saw last week, Tyson was knocking on Clarice’s door for a chat. Clarice tells him that she thought her dad “hung the moon,” but in actuality, he was a criminal. “I built my life on him,” she says, fighting back tears. “Now, I think I have to choose who I’m gonna be for myself.”

The two bond over their dysfunctional dads until Clarice gets a page: “TYSON = SUSPECT.” (Anyone else sometimes forget that it’s 1993? Just me? Moving on.) She makes a run for it, but when she throws open the door, two burly men are there waiting. She puts up one helluva fight… that is, until the duct tape comes out.

Ardelia and Tripathi arrive to the apartment to find Rebecca Clarke-Sharman’s business card and Clarice’s broken necklace on the ground. Ardelia knows from the necklace alone that her friend’s in serious trouble. 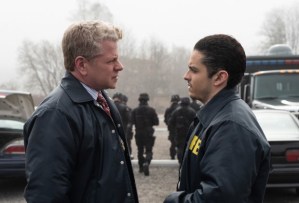 Clarice is brought to a dark warehouse where she’s locked inside a cage. Next to her are other trapped women, presumably the ones Ty trafficked for Hagen. One woman, a med student, confirms that the old creep gets them pregnant, but none of the babies have lived, and neither have the women. She says she thinks Hagen has a genetic disorder. He has one miracle son, and he wants another. “And afterward… the machine,” she says, as we watch a goon hose off blood out of a grinder. Gross.

Esquivel shakes down a contact at a security firm for Hagen’s location (an animal research facility), and as he works his (very illegal) magic, Clarice is brought face-to-face with Hagen. And Dad wants Tyson to kill her to prove his loyalty.

Meanwhile, ViCAP arrives to the location and surrounds it, just as Congressman Gant turns the heat up on AG Ruth Martin. She suspects Gant has taken campaign money from Hagen in the past, and after confirming that Krendler has probable cause, Martin gives the ViCAP team the go-ahead to raid the compound.

ViCAP forces their way inside, but Hagen doesn’t want to leave “his children” — dead fetuses and human tissue he collects in jars. Clarice tells Tyson that his mom was one of these women, and Hagen killed her just like he killed the rest. “He’s got you in a little jar too, Ty. Poisoned, twisted, you’re practically his twin,” she spouts. And with that, Tyson takes aim at his dad and shoots. The man’s body smashes all of the glass shelving and jars as he crumples to the ground.

Krendler and Ardelia help the women escape the building, but Krendler takes a bullet in the process. Back inside, Ty tells Clarice he still has two bullets. “Is there a chance… for me?” he asks. That depends on whether he can live with the burden he must carry from here on out. Abduction, serial murder, rape. “Can you live with that?” she asks. The answer is a resounding no, and Tyson takes his own life. 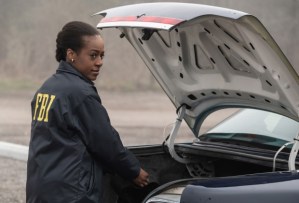 Meanwhile, Martin takes the podium to speak to the press, stating that other accomplices are still out there, referring to the lawmakers who took campaign money from Alaster and conspired to obstruct the investigation. A special prosecutor will be hired to investigate said congresspeople, starting with Gant and (gasp!) herself.

Clarice visits Catherine, and while there, she recalls her mom sending her away from home at the age of 10. “I have been mad at her for so long… she was just trying to protect me,” she says, breaking down. She then visits Krendler in the hospital to update him and ask for her job back. He says he’s sitting her out for a two-week mandatory break.

Ardelia has Clarice’s necklace fixed, though she added a bead to it. “Our bead,” she says. Had it not been for the necklace, Ardelia says she wouldn’t have known her roomie was in trouble. “We can’t pretend the bad things that happened to us didn’t happen,” she says. With that, Clarice hops in her car and heads out to visit her mom… finally.

What did you think, Lambs fans? Did Clarice satisfy your craving for more Starling? Grade the finale (and season) below, then fire away in the Comments.