The wedding dress was a big tip-off that there was more to Andi’s photo shoot than photos.

But Andi kept on smiling and posing on Tyler Perry‘s Sistas Wednesday night on BET and she even convinced her best girlfriends to “model” too by putting on bridesmaids dresses. There was a male model standing in as the groom and then Gary showed up with a grand announcement. This was his big surprise: It wasn’t a photo shoot but an upgraded proposal and spontaneous wedding.

Andi seemed like she wanted to say yes but her concerned friends said they needed to talk to her first, much to Gary’s shock and chagrin. Great tux though, Gary! Besides, could the photographer and the whole scenario have been any more obvious? Come on, ladies! Pay attention. This also means that Danni is not going to get that $500 the photographer promised. 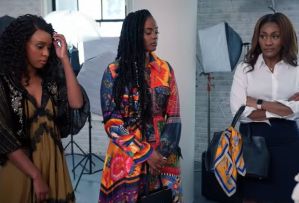 Elsewhere in Atlanta, Zac got a stock tip from a tourist at the airport that could turn out to be lucrative but could also land him in a lot trouble. He also made waves at Andi’s office by popping up to see Fatima. But Fatima asked him to leave and said she’d think about forgiving him, and Andi said Zac could be Fatima’s boo in shining armor despite the Karen drama.

Calvin meanwhile went to Sabrina’s bank to get his affairs in order after a thief stole his checks and caused his account to be overdrawn. But Calvin’s arrival only made things worse within his love triangle with Sabrina and Jacobi. Calvin grabbed Sabrina’s arm because she couldn’t reverse the charges without a police report, and Calvin grew angry. Jacobi attempted to defend Sabrina and ended up knocking out Calvin with a single punch.

Comedy ensued, but Sabrina wasn’t laughing. She suspended Jacobi from work and, out of pity, straightened out Calvin’s account. When he came to, Sabrina (who was wearing a fantastic dress), let him know his account was back in working order but asked him to exit the bank.

He argued with her initially but ultimately agreed he should go. Maurice watched the whole train wreck unfold — he is partially responsible — and only seemed to regret not having popcorn to snack on while watching. Maurice even sarcastically admitted he wanted Jacobi to get in trouble.

What did you think of Gary’s surprise wedding idea, and should Andi say yes? Drop your thoughts in the comments below.