Women have played a pivotal role on OWN’s coming-of-age drama David Makes Man from the start. But in Season 2 (airing Tuesdays at 9/8c), the ladies in David’s life will take on an even greater importance, producers say.

As fans saw when the series returned this week for its sophomore run, the title character is all grown up now and played by Snowfall and The Wire alum Kwame Patterson. But being an adult doesn’t mean you have it all figured out, and when Adult JG (played by The Magicians‘ Arlen Escarpeta) accidentally gets shot trying to break up a fight, David starts having visions and eventually an emotional breakdown.

Before David spirals out of control, his mother Gloria (Chicago P.D.’s Alana Arenas), her friend Robin (Bobbi Baker), his niece Trenise (Trinity Cidel) and his semi-girlfriend Nicole (Ballers‘ Brittany S. Hall) all try to help David, but he pushes them away. 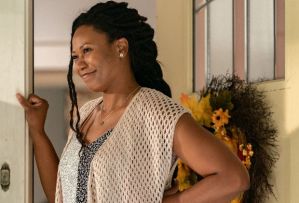 “Black women have had to take on so much throughout history,” showrunner Denitria Harris-Lawrence tells TVLine. “It’s a matriarchal culture, but you try not to smother. We capture women as the catalysts for change so well on David Makes Man, especially in Season 2 from Gloria to Nicole to Mx. Elijah. All of these people know David, and they’re trying to help him know himself.”

Harris-Lawrence’s insightfulness as a Black woman is one of the reasons that David Makes Man creator and Oscar-winning writer Tarell Alvin McCraney says he wanted her to be his showrunner.

“Four years ago, when they asked me why I wanted a Black woman showrunner, I said I needed a Black woman who was going to come into the room and know when it was time to go home,” McCraney says in reference to shooting Season 2 during both a pandemic and a racial reckoning.

“Some of us are pressurized to adhere to the industrial complex that work will make you free, and Dee knows good work is better than hard work,” the Moonlight co-writer adds. “You can work really hard and do badly. She would say, ‘Take the day off. We talked about this enough. We’ll come back tomorrow fresh.’ And we would. It’s not about making Black women the catalysts of change. They are, and they can be for David if he just reaches out.” 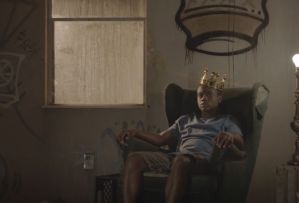 McCraney and Harris-Lawrence also worked to imbue Season 2 with more levity and joy.

“Season 2 has so much joy infused in it, especially in comparison to Season 1,” McCraney divulges. “We couldn’t help but add something to giggle about or marvel at in every other scene, even in the midst of talking about the trauma that has happened to David in the past and certainly him worrying about his future.”

“Even with that trauma, we try to anchor him in the love and joy of the now,” he expounds. “I credit that to Dee and the writers’ room. Our show does deal with trauma and Black pain and still engages in joy.”

Patterson, who admittedly has played his fair share of thugs, says taking the lead in David Makes Man forced him to dive deep into his own emotions at times. The end result is a performance Oprah Winfrey has heralded as brilliant. 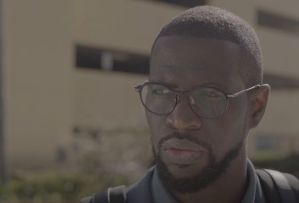 “This role opened up places I’ve never been. I’ve cried before in roles, but not like this,” Patterson reveals, crediting his costar Escarpeta. “Arlen was a big catalyst for me when I felt like I just couldn’t figure things out. Whether it was too much dialogue or it was so emotional, I didn’t know if I could go to those places.”

“Arlen would say, ‘Go lie down and take a nap, and when you get up, we’ll work on this again until 3 in the morning.’ It was that kind of camaraderie,” Patterson concludes. “It helped me realize I didn’t have to have it all figured out. It took me forty-something years to figure out it’s OK to cry. I don’t have to feel like I’m soft or weak or that kind of thing. I wish I had figured that out a long time ago. Now I’m about to cry on everything I do.”