Motherland: Fort Salem returned to active duty on Tuesday with the arrival of a new witch, the rumors of a new threat and the beginning of a new nightmare for a key member of the team.

TVLine spoke with series creator Eliot Laurence about the Season 2 premiere (and beyond), but let’s start with a quick recap: Raelle and Abigail returned alive, much to the surprise of their fellow witches; Tally underwent a procedure to de-Biddify herself; Penelope, the daughter of Vice President Blanton Silver, was turned over to the Army after being outed as a witch on national TV; Adil’s sister expressed her concerns about him “changing” as a result of all the suffering he’s seen; and Scylla learned that the Camarilla is actively plotting to take down Army and Spree witches alike.

The premiere ended with Tally having a terrifying nightmare in which Alder and her team were battling (and losing to) some giant worms in the jungle. But if it was just a dream, why did Tally wake up to find herself covered in worm bites?

Below, Laurence answers some of TVLine’s burning questions from Tuesday’s season premiere:

TVLINE | Let’s start with Tally, who’s already going through it. If Raelle and Abigail hadn’t returned, was she really prepared to just live out the rest of her days as a Biddy?
She was! But did she think that decision out? No, not much. And that’s very Tally to jump into the breach like that. She believes in her truth so utterly that she does insane things. I think she would have found a way to make it work, but that was the choice she made. And it was a pretty intense choice. Those biddies don’t last for very long. They’re kind of like biological batteries for Alder. It’s quite the assignment, but she just leapt in there because she’s Tally. 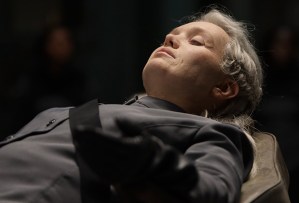 TVLINE | I guess this isn’t a question, but that whole de-Biddifying sequence was so cool.
When I saw the special effects in post, and I saw that cobwebby network they created, and the wonderful Emilie Leclerc who was just giving me David Lynch vibes when she was bringing everything to life… that was one of those moments in the show where everything just comes together in a cool way.

TVLINE | And her struggle isn’t over yet. What does the future hold for Tally?
In Episode 10 last season, Tally and Alder had that really intense conversation in the caves. Alder said, “I’m a general. I make tough decisions every day, and I stand by every single one of them.” Now the question is: Does she? Maybe there was one that she doesn’t feel so good about, and because of Tally’s connection to her, she’s going to have access to some PTSD that she’s not supposed to have.

TVLINE | And Tally’s nightmare with the worms was our first taste of that?
Totally. And it’s also fun because we’ll get to see Alder through the ages. This was a conflict that was about 20 or 25 years before the present day of the show. It was a colonial war, and we certainly know about those. It’s cool to see the world spread out, even into history.

TVLINE | At least Raelle and Abigail made it back, possibly more powerful than ever? What might they be discovering about themselves and their new power?
Well, it’s an ongoing thing. They were protected by this force, and I think it’s the work of the first few episodes of the season to see exactly where that’s from and how it’s manifesting. It’s the potent question of the early part of the season. It’s also possibly the next big super weapon, and armies are always looking for the next new thing that puts you ahead of everybody else. Alder, because she does what she does, is very keen to figure out how to implement and militarize this.

TVLINE | If the Camarilla are coming for spree and military witches, might they end up having to team up against their common enemy?
Yes, but because it’s Motherland, it won’t be easy and sagy. It’ll be kind of gnarly. But you’re absolutely right. These petty squabbles that have been going on for hundreds of years in world history are pointless in the face of someone who wants to completely wipe you out.

TVLINE | I did love that one line, “Hate is a disease. Find patient zero.”
This is a season that looks a lot at hate. As you saw in Episode 1, there’s suddenly a very public outing of a witch. Penelope didn’t even intend to [melt that glass]. She was just singing in church and something happened vocally. There’s a lot of hate that comes up around that, so it’ll be a season of examining institutions and rooting out the corruption in these institutions and looking at how hate is so infectious within these structures of power. We were definitely inspired by what’s going on in the world, and I hope it’s not an after school special kind of way.

TVLINE | I did freak out when I heard the word “contagion” in one of the promos.
There’s definitely some of that. We saw a little bit of the witch plague in Season 1, which is a disease that’s been designed to specifically hunt out witch blood, and it gets worse this year — a lot worse.

TVLINE | I love me some Victor Webster, so I’m glad to have him on board as the VP. He seems surprisingly cool with the witches. Will that relationship remain stable?
He’s in an unique position. Silver’s wife, who passed away, didn’t know she was a witch, but she passed that on to Penelope. The magic we see on the show is stuff that’s been honed for hundreds of years. If you don’t have training, you might be that person who has hunches or can tell when it rains. But until you’ve been militarized, you don’t have these magic powers under control. So not only is he finding out that his late wife was a witch, but also that his daughter is a witch. It’s that thing about growing up as a gay kid when your parents suddenly see you differently, sometimes instantly, and how difficult that can be to process. That’s his journey, and he does a pretty good job — for the most part.

TVLINE | Had to save the biggie for last: What are the chances of a big Raelle/Scylla reunion this season?
The chances are good. These are two celestial bodies that are getting closer and closer to being in the same space. As writers, it was challenging to get them in the same room with the epic stories that they both represent. But like you were catching on to about people joining forces, the meat of the season brings people together in ways they never expected. I’ll say the chances are really good.

Your thoughts on Motherland’s second season premiere? Grade it below, then drop a comment with your full review.