NFL player Carl Nassib’s decision to come out as gay led to a groan-inducing joke from The View‘s Joy Behar on Tuesday, which Behar attempted to rescind later in the broadcast.

The View: Every Panelist Who Has Left Over the Last 24 Seasons

As seen in a clip posted to Twitter by journalist Justin Baragona (embedded below), the discussion of Nassib’s coming-out prompted Behar to remark, “After they said ‘penetration in the end zone,’ they lost me!” In response, guest co-host Ana Navarro jokingly put her fingers in her ears, while Sara Haines groaned and hung her head, Sunny Hostin shook her head while smiling and Meghan McCain raised her eyebrows at the comment.

Later in the segment, Behar said, “I just long for the day when you can just be gay in the world, and it doesn’t become a big deal,” then walked back her earlier joke before tossing to commercial: “By the way, that inappropriate joke I made for daytime television? Scratch it. Make believe I never said it.” 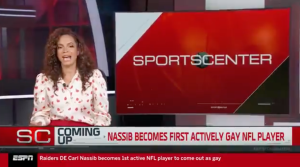 Behar hasn’t been the only media personality to make a gaffe while reporting on Nassib, a defensive end for the Las Vegas Raiders who came out in a video message on Monday evening. On ESPN, a SportsCenter chyron (embedded at right) incorrectly identified Nassib as the “first actively gay NFL player,” instead of describing him as the NFL’s first active player in league history to come out as gay.

Similarly, social media users criticized The New York Times on Tuesday for a headline that read, “Carl Nassib Was an N.F.L. Everyman. Then He Came Out as Gay.” The headline appears to have since been changed, now reading, “Carl Nassib, the First Openly Gay N.F.L. Player, Has Been a Football Everyman.”

Watch video of Behar’s joke and subsequent retraction below:

Joy Behar tries to walk it back at the end of the segment.

By the way, that inappropriate joke I made for daytime television, scratch it. Make believe I never said it." pic.twitter.com/z4klo7CXBc